Chinglish often mutates perfectly functional Chinese into English with an extra chromosome. But that isn’t the case with “scenic toilet view,” which I saw advertized on a glossy boulder along the high trail through Tiger Leaping Gorge. 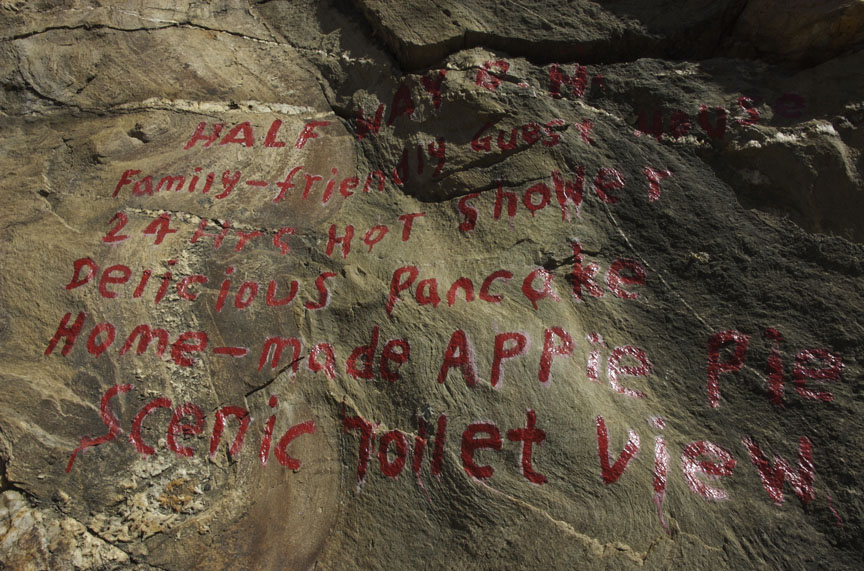 However huh?-inducing it may be, “scenic toilet view” is a grammatically correct phrase in English. But I can’t help but dwell on its individual components. Scenic. Toilet. View. A better summation of my experiences in China I’ve yet to encounter.

Let’s break this down in three installments. I’m tempted to start from the, er, bottom up, but maintaining order is key to building a harmonious society. So I’ll start with Scenic.

Spinning slowly at the northern tip of the Old Town, Lijiang’s waterwheel is in a scenic setting. The chipper throngs of Chinese tourists posing for photos in front of it certainly think so. After all, the slate roofs of the Old Town housesâ€”many of which have been rebuilt since the town was shattered by an earthquake in 1996â€”undulate the eye east, west, and south to the mountains circling around. 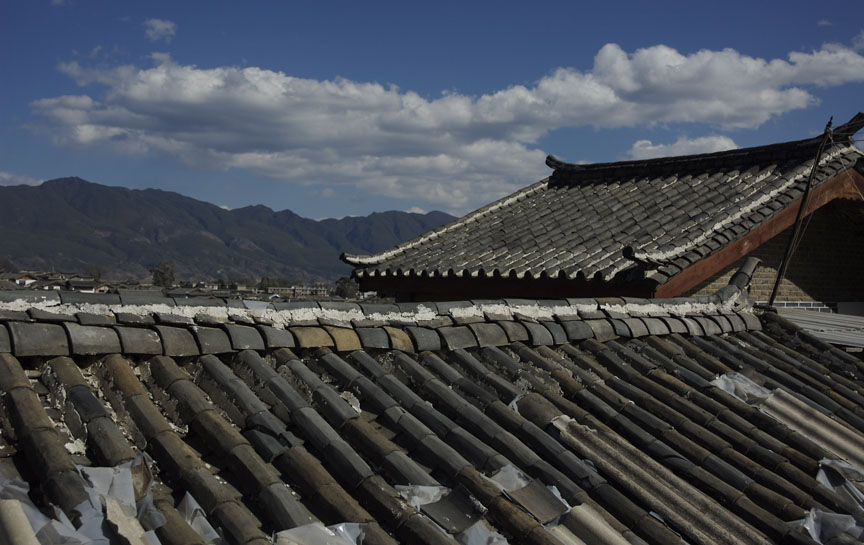 To the north, Jade Dragon Mountain flaunts 18,000 feet of snowy crags garlanded in clouds. Orange carp and polka-dotted trout get fat in the slow-moving creeks bordering Lijiang’s UNESCO-certified cobblestone streets. The willows are just beginning their charming spring droop. And the wheel itself is a modern reconstruction of a medieval technological marvel whichâ€”wait for itâ€”churns water. Behold its liquid-agitating majesty!

All of Old Town Lijiang is scenic. To the north, the much larger New Town offers a collection of unremarkable modern buildings, branches of China Construction Bank, supermarkets, and KFC. 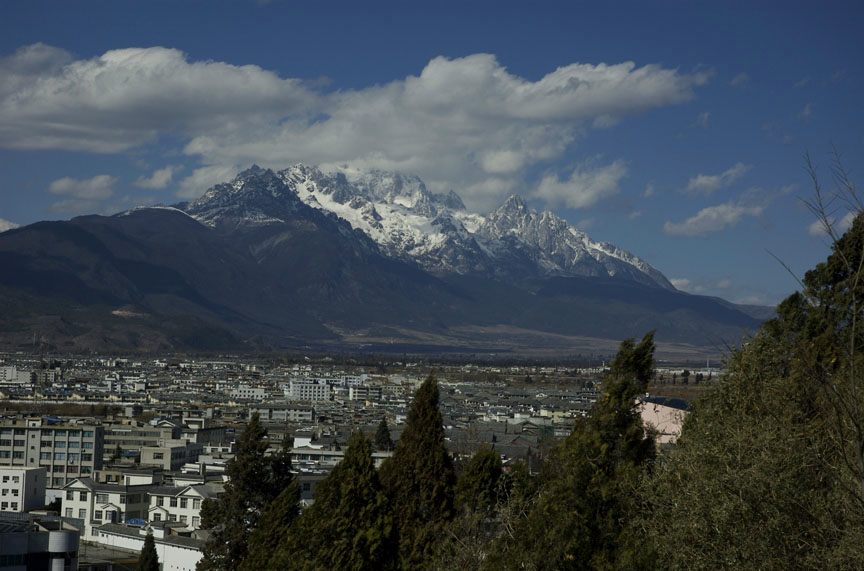 But there’s a problem with “scenic.” It’s the apologetic refuge of tourist agents, real-estate brokers, autodidacts of obscure historical facts, and hopeful highway authorities. From provincial charm (AKA small-town ignorance) to panoramic vista (side of the road, hill), what’s called scenic is often boring. Scenic is the beige of travel.

Nine hundred years ago, Lijiang was the capital of the matriarchal Naxi culture, one of two dozen ethnic minorities found in Yunnan province, which is home to half of all of those in a China that is more than 90 percent Han. Now it’s an EverBright Fun Zone for what seems like 7.9 million domesticâ€”and perhaps 79 foreignâ€”tourists. Those who don’t wear the cowboy hats for sale in the cloned shops wear identical baseball capsâ€”often at a tragicomic ghetto angleâ€”provided by their flag-waving tour guide. They are cheerful and loud and pushy.

They are in the distance in this photo. 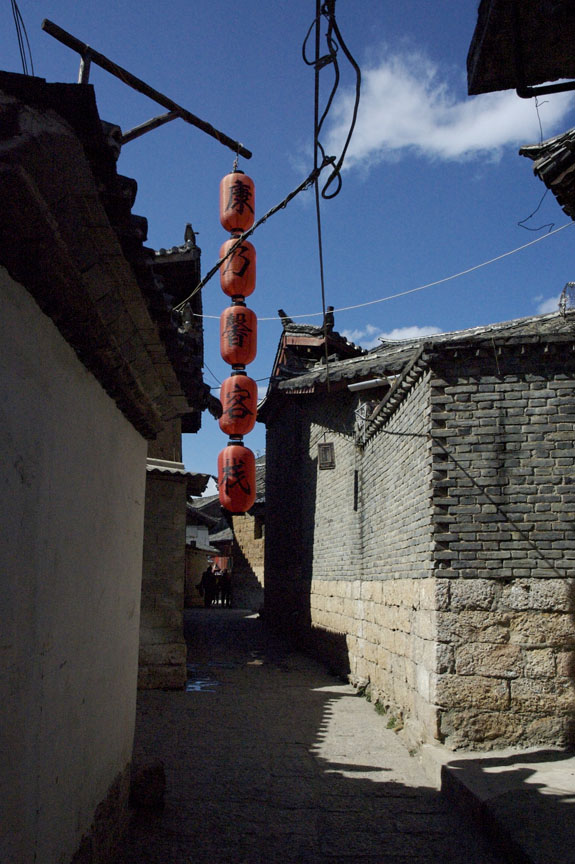 The throngs can be worth the hassle for something as impressive as the Terracotta Army Warriors, for instance. But most of the time, what you’re encountering is the scenic. I’ve dodged the boredom in a perhaps unorthodox fashion: by not going. I’ve seen almost no scenic places at all.

There it is. Cat’s out of the bag. I am a lousy tourist.

I’ve visited only six locales in four weeks. I buy almost nothing beyond food and shelter. Fun facts about the political machinations by some Iago to undermine Emperor He-Had-It-Coming have only fleetingly passed through my brain. I’ve yet to step inside a temple; when it comes to getting my Marx on, I apparently fit right in.

However, I did capture this shot of incense outside a Buddhist temple in Yunnan with a very, um, scenic overlook. 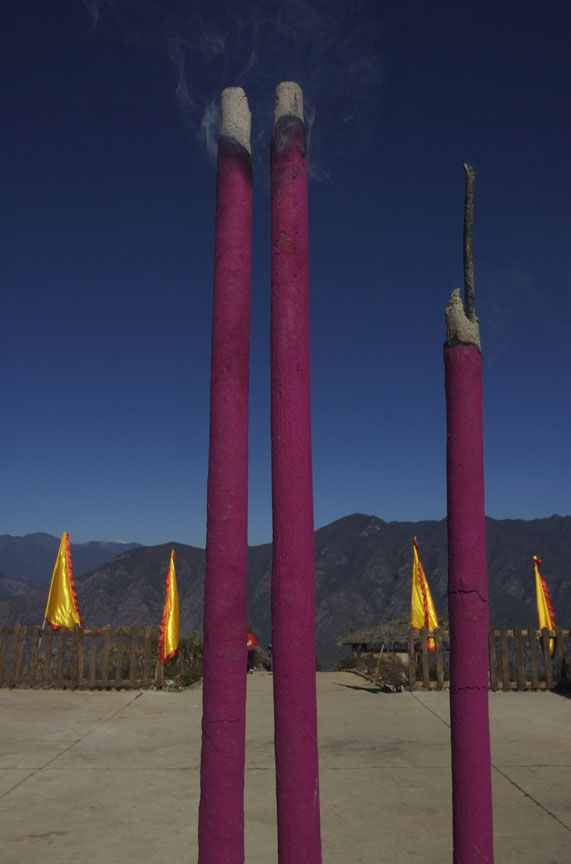 Part of my lack of sightseeing has to do with the fact that China is, sensibly enough, for the Chinese. A lack of Mandarin and the travel infrastructure don’t make it easy for a lone Yingyua-speaking woman to venture too far off the beaten trackâ€”and I don’t like that track so much. Though 126 million foreigners visited China in 2006, travel is still overwhelmingly oriented to the package-tour domestic tourist. Foreigners aren’t above this, of course, frequently arranging themselves in likeminded clumps, whether they’re fanny-packing Britons with peeling shoulders staying at “four-star” hotels or twenty-something dredlocked Aussies in backpacker hostels who like to opine that air travel isn’t “real.”

I also need to get over my aversion to guides, which is based on pride, being a New Yorker, and Egypt.

But for the most part, I walk a lot. I take notes and notice and public transportation. On the way to the scenic I get lost in the view. 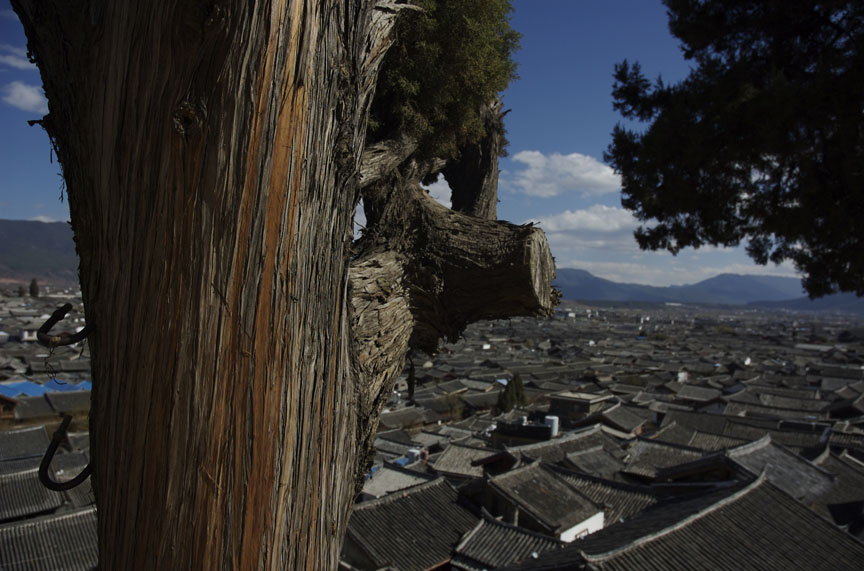 I can tell you a lot more about the bus drivers than the places they drive you to (men with bedhead and cigarettes who love pop music, coasting to the stoplight in neutral, and slamming into second gear with gleeful force). In public parks I watch men and women of a certain age walk small dogs and wonder if perhaps they have empty-nest syndrome. Grandfathers stoop for hours to help toddler toes get a feel for that walking thing.

These are the sorts of things I pay attention to. In Lijiang, I spent one afternoon studying the sun-soaking loll of the restaurant staff where I was eating chicken noodle soup. Entirely female, the staff lounged around in that almost animal luxury that can follow physical labor, which I remember so well from my restaurant days. They had their feet up. Their knees poked each other in the side. Their arms were slung across the backs of the chairs. One girl neatened the pony tail in another girl’s hair, and then gave her own a tightening yank. It took me 20 minutes to get the attention of my waiter, who was resting her the side of her face on the table in a cradle she had made of her hands. With half-closed eyes and a faint smile, she listened to the loud commentary of the chef, a middle-aged woman with strong shoulders and a sarcastic laugh. It was Friday night, and the dinner rush would begin shortly. There were still two days left to the New Year holiday.

I knew that nearby, in Sifang Square, old Naxi women were singing traditional songs. Old men were watching, the infants strapped to their backs taking in the crowds with that furrowed-brow baby skepticism. 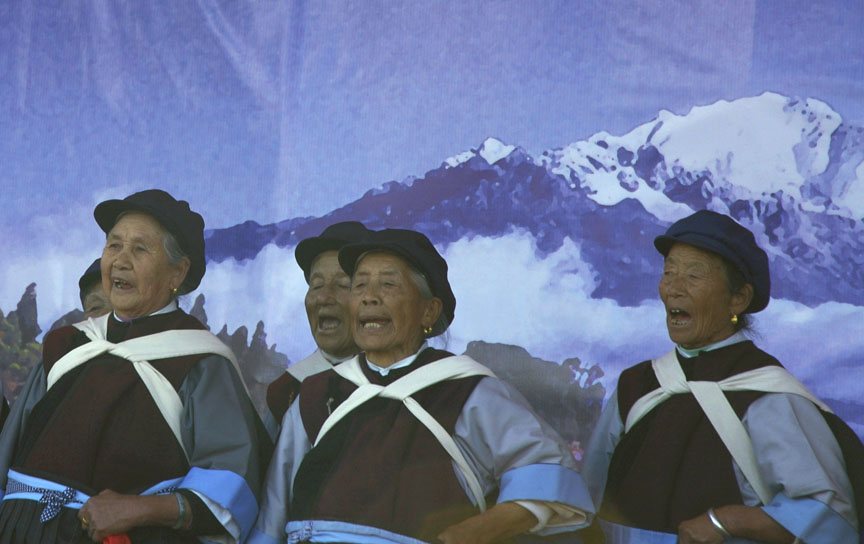 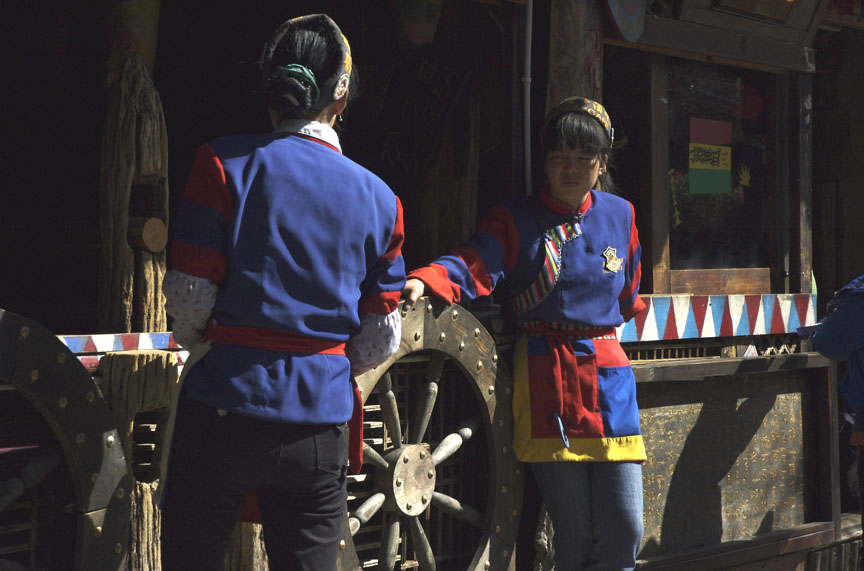 As I waited for the check, lingering in the sun’s warmth, a tall Chinese man aimed a huge, snout-like zoom lens at me. Near him, a young woman in a traditional Naxi dress followed his focus. She seemed surprised to find me in it. I gave her a wry lookâ€”you must get this all the timeâ€”but she just stared back at me. I am a tourist attraction, too.

I’ve had some great contact with locals I met through Hospitality Club, a travelers’ networking site, but largely I remain on the outside. Chinese-speaking foreigners who live here tell me they feel the same way. I’d like to think I’m cultivating loneliness, but perhaps I’m just leaving some things unexplained because I prefer it that way. Imagination over anthropology. Fictive musings may not make for accurate reportage, at least not when it comes to the facts. But maybe sometimes I’ll get lucky and instead hit on the truth.

Here’s one last thing about scenic. It’s used by “nice” people who fear of expressing any negative sentiment about anything or anyone, no matter how vile or dastardly, for fear of offending or, worse, being wrong. These people have the beige of hearts. They’re holding something backâ€”there’s something you don’t want to know. Here “scenic” is nice-person code for their abhorence of alien cultural practices they’re too sensitive to mention.

And that brings me to my next topic: Toilet.

Take attention. The tasty is coming.