In Antalya I make a plan to loop around ancient Lycia, heading west through the mountains on the northern border; south to Patara; east along the coast, where mountains and ocean meet; and then up the eastern border back to Antalya.

The Lycian culture dates back to at least the 13th century b.c., because ancient records say the Lycians fought with the Hittites (from what is now central Turkey) against the Egyptians under Ramesses II. If Homer is to be trusted, they then battled the Greeks alongside the Trojans, whose capital city was in what is now northwest Turkey. The Persians, the Greeks, the Rhodians, and the Romans all controlled the region at various times; nevertheless, most Lycians didn’t take kindly to foreign rule. The people of its capital city, Xanthos, committed mass suicide three times when faced with an approaching foreign army. Brutusâ€”of Et tu fameâ€”and his troops found fewer than 200 people alive when they took the city in the first century b.c. Later Romans were more successful in Lycia, because they heavily invested in the cities and ports during the first few centuries of the first millennium a.d. This period was, incidentally, the last hurrah of Lycia. One earthquake in 141 a.d. leveled most of the cities. They rebuilt, but a hundred years later another enormous earthquake shattered them again. And that was pretty much that.

My first stop is Patara, Xanthos’ port city, and the most important one in the 1st and 2nd centuries a.d. There’s so much to see here that I get stuck here most of the day, which means I don’t get to visit as many sites as I intended. But one amphitheater can keep me occupied for hoursâ€”hell, so can a sherd of ancient pottery with a partial fingerprintâ€”so I guess getting to more than one site in a day is far too optimistic.

I check out the adjacent beach first. To get there, I may be doing something illegal when I accidentally (and regretfully) cross through a sea turtle nesting area. I don’t see any turtles, but there are animal tracks of all kinds. These are my vote for turtle toemarks. 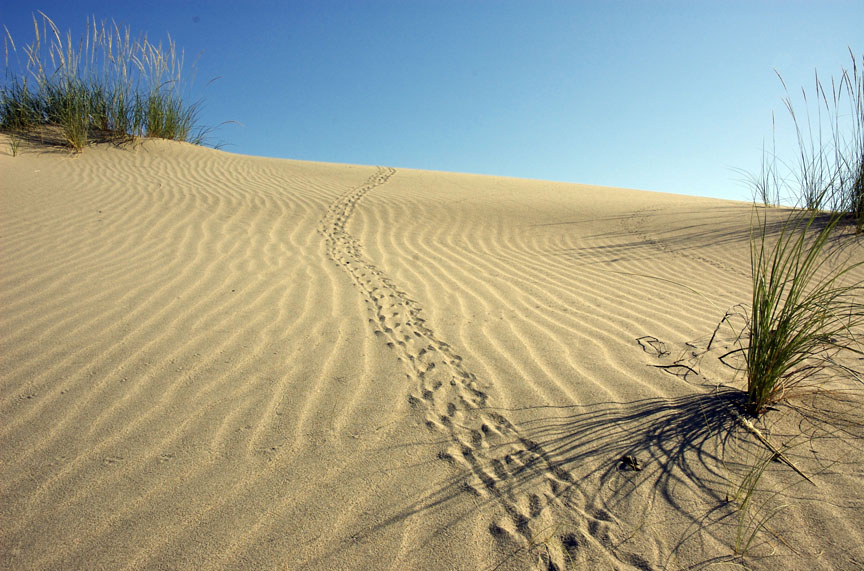 Most of the beach bunnies are hoary hares long in the earsâ€”European couples in their 50s. They have to make their own waves; here, the Mediterranean is so still and gentle that babies should be born in it. I head for a relatively uninhabited part of the beach. As I bob in the aquamarine waters, one couple nearby get comfortable. She takes off her bikini top and settles nipples up on the beach towel. She firmly secures a tennis visor over her eyes. He wiggles out of his Euro-style tightie swimmies butâ€”and this is what throws meâ€”leaves his shirt on. He sits with his knees up, and I can see the curve of his naked hip where it disappears under his shirt. All that sand on one’s bare ass seems terribly uncomfortable.

The women who live in the small agricultural villages around Patara are all covered up, but not in some bodies-are-sinful way. It’s more of a tuck-your-shirt-into-those- high-waisted-pants-cause-that’s-our-style way, a cover-your-head-it’s-freaking-hot -in-southern-Turkey-and-we’re-bent-over-the-fields-all-day-it-will-get-in-your-eyes kind of way. (There must be a German word that conveys this entire notion.) I wonder what they think of all this pointedly exposed flesh.

I climb the high hill separating Patara’s ancient portâ€”now a marshland a kilometer inlandâ€”from the current shoreline. Atop this hill is a double archway that it takes me 45 minutes to reach. There are endless thorns and finger-slicing basalt rocks and will you stop touching me?! wisps of spider webs to navigate, making it a slow go. Eventually I climb into the arches. The Mediterranean peeks through. 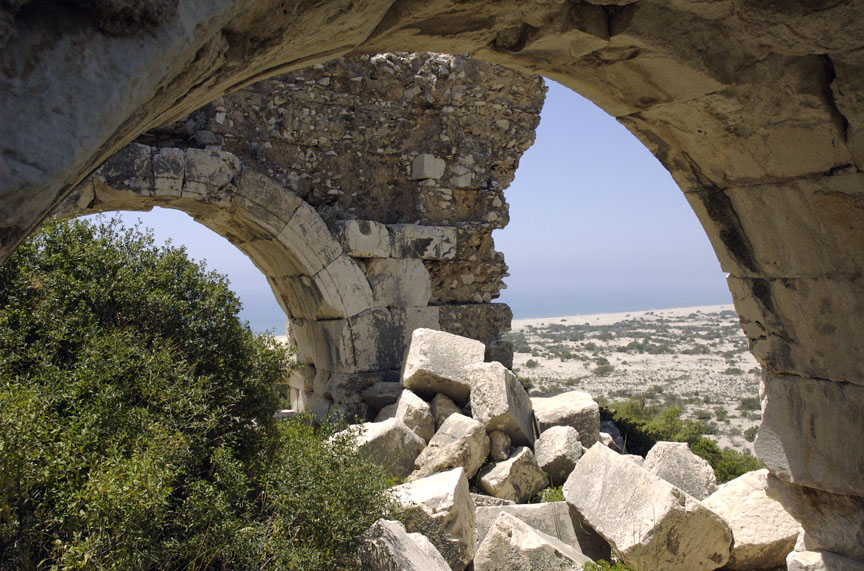 From here I can see what I couldn’t have detected from belowâ€”stone Roman sarcophagi cracked open first by ancient looters and then by time. I duck and scramble my way down the cut stones gravity is taking bottomward until I am surrounded by the tombs. Some are open, tress-like moss the solo inhabitant. Others have their lids but are easy to peer into. 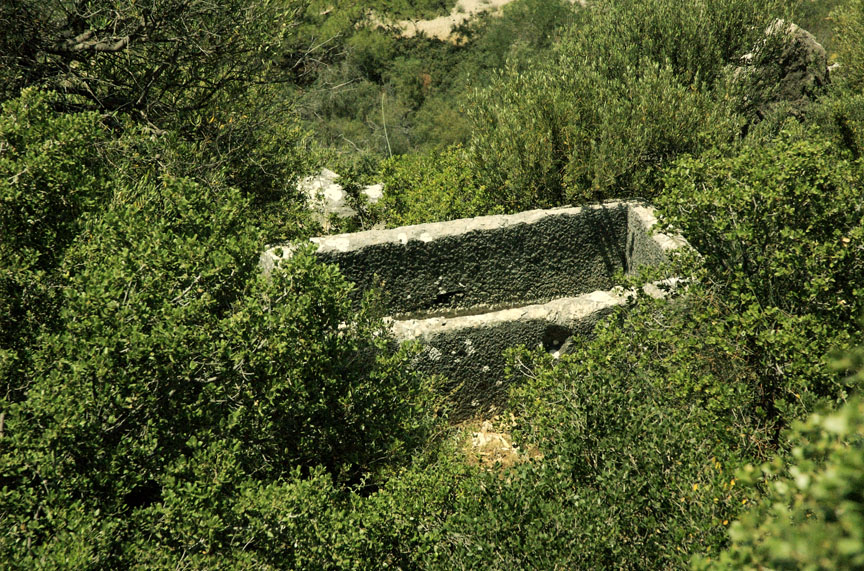 But here’s something new: I am creeped out. Jesus, I think. Everybody’s dead. The dead themselves are long gone, either cremated 1,800 years ago or having leeched back into the earth. Still, I’m surprisingly uncomfortable. I’m the only person as far as I can see. Nipple Toaster and Bottoms Up are obscured by the distance and the haze of heat.

I wanted the real people in the archaeology, didn’t I? Not that Inanma chick, with her fierce appetites and fertility rites and noncorporeality, but something realer. And now I have them.

Somehow I had forgotten what’s so appealing about gods: the eternal-life thing. The escape-from-the-rot-of-life thing. Inanma and her calls to “plow my vulva” (which sounds even more painful than having sand in your crack) seems not so disappointing after all.

Other Roman sarcophagi at Patara have inscriptions telling you who, what, where, and when (rarely why), but these hilltop tombs have none. Their identifying texts have disappeared over time. There is no singular life here. Just a culture’s death rituals, anthropologically interesting but hardly personally moving.

You can hear more about the site in this audio clip, in which I am possibly doing something illegal. Again.

I make my way down the other side of the hill towards the main street of Patara. From here you can see the majority of the ruinsâ€”Lycian inscribed panels, the Roman amphitheater, Byzantine walls. (This is but a fractionâ€”most of the site is still unexcavated.) Furthest away are a gateway built in honor of a visit from Hadrian and Roman tombs built along the entrance road. People all over the world have been building their eternal digs in high-traffic areas pretty much always. 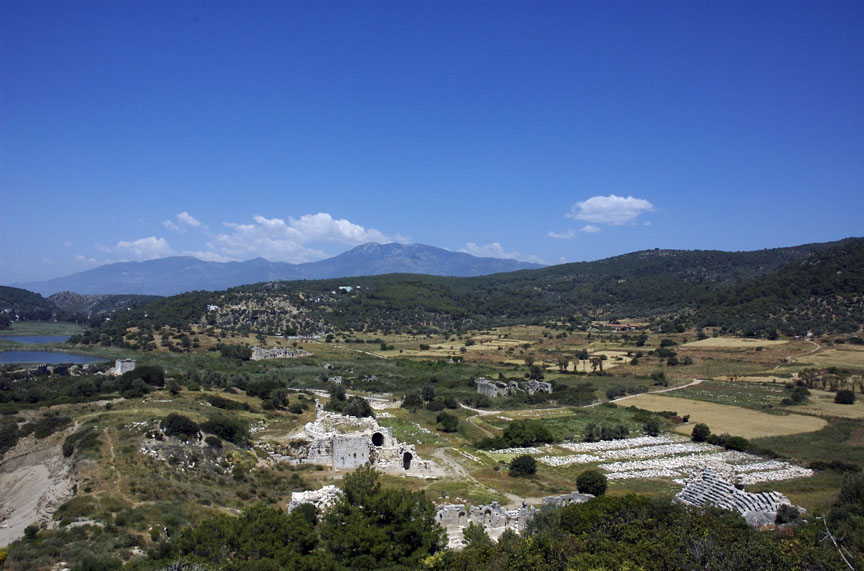 It must be over 90 degrees. I’m hot and sore, panting and need water. My legs sting from the sweat that has rolled into the jagged slices the thorns have made in my shins. This all makes me oddly happy. It’s verification that at least somebody around here still has a pulse.

A few minutes later, I emerge at an amphitheater, where after 20 minutes of having the site to myself to take photos, such as this one from the perspective of the emperor’s seatâ€” 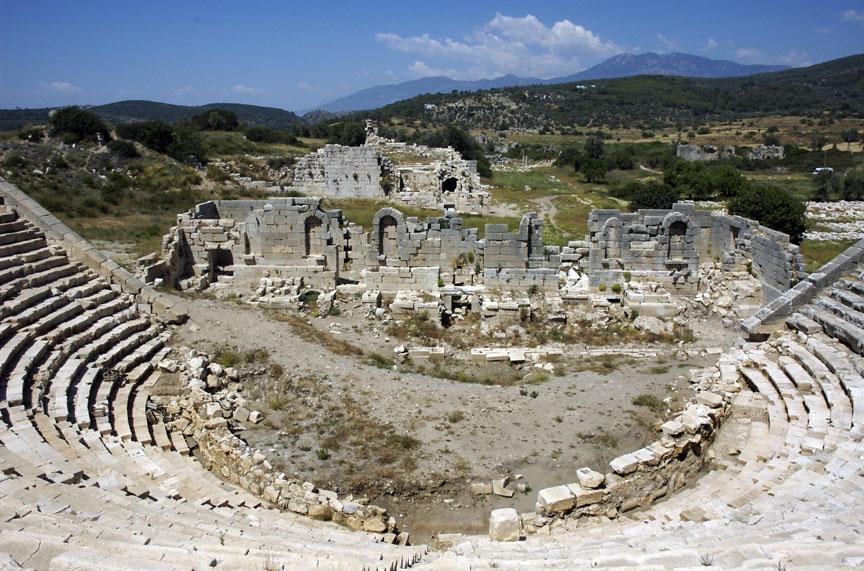 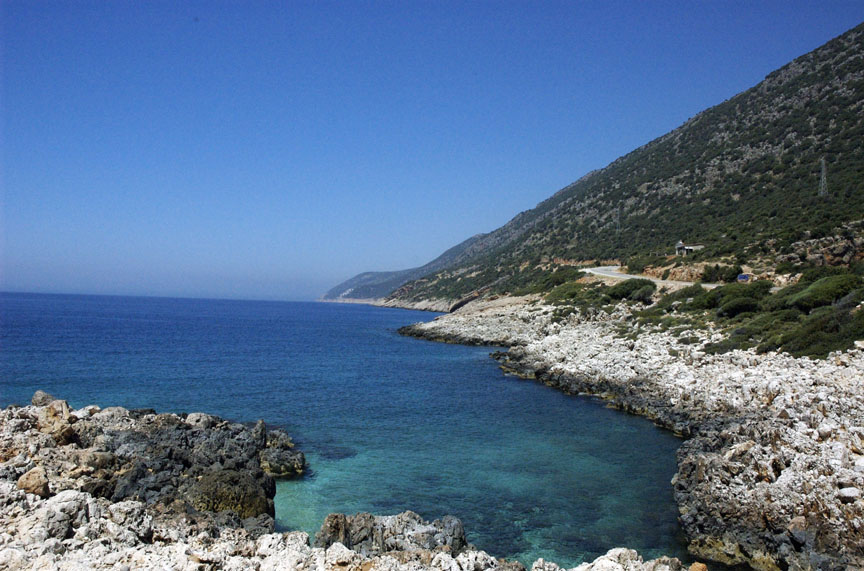 I’m hoping to find real people in the archaeology. In the week since I was at the museum, I’ve done some research into Inanma. It turns out that she was a Sumerian goddess, something I would have figured out sooner had the museum used the more common spelling of her name, Inanna, or gotten immediately had she been called by her famous Akkadian name: Ishtar. She is the goddess of love, fertility, and war. She loves hot sex and bloody battles. She will bone you senseless, but if you try to leave her she will hunt you down like the dog you are.

You find that sort of hot, don’t you?

Both the “Oldest Love Poem” and “Inanma Prefers the Farmer”â€”more familiar as “The Courtship of Inanna and Dumuzi”â€”are mythology texts describing boisterous shaggings that were the template for keep-the-crops-growing fertility rites between priestesses standing in for Inanma/Inanna/Ishtar and kings or said priestesses and select young men. (If someone trots out something ostensibly feminist about the ancient tradition of “sacred whores,” there’s a good chance they’re talking about these rites.)

I find myself disappointed. I wanted Inanma to be a real person. Sure, you can glean a remarkable amount about a culture through its mythology, but I wanted Inanma to be just a little more mundane. I wanted her to prefer the farmer to the shepherd because of the quality of his flax or the chubbiness of his lambs, not because of the human need for metaphor to explain the changing of the seasons. I wanted her to have been someone who was born and then died, someone who was not the representation of something but the real thing herself. A single life unimaginably different in its details yet essentially the same as mine.

What’s strange about this urge is that I’ve been spending most of my time in Istanbul lingering over mezze and raki with flesh-and-blood people whose lives essentially fit the bill. Dogan, with his 43-hour work days and dream to become a historian specializing in early-20th-century Istanbul. Sercin, with her ongoing decryption of the bureaucratese on the U.S. Diversity Visa application form. Bahar, with her rowdy batch of photographer friends knocking back wine in a gallery where modern-day gypsies stare out from exquisitely beautiful photos. Fulya, with her memories of the 1999 earthquake that destroyed Izmit, her hometown, and killed so many people she knew. Mine, with her daily deadlines for Aksam and the longer piece about the occurrence of the year 2012 in apocalyptic literature.

We have different perspectives and histories and cultural backgrounds. Yet there is never a shortage of ways to understand each other. So why leave Istanbul for Antalya? Why leave now with the living for then with the dead?

Maybe it’s because I know the living don’t have any more answers than I do. Or maybe I’m full of shit and just want to drive a car for a week. Actually, all of these things can be true at once.

So I take a 12-hour bus from Istanbul to Antalya, where I rent a car and hit the road.a Amphitheater” />

â€”I encounter a whole drum kit of heartbeats. A group of college-age kids follows a grey-haired but energetic man into the site. American or Canadianâ€”it’s often hard to tellâ€”they politely pretend to listen to him but are clearly eager to climb through the seating rows.

There’s another older man with the group as well. He wears the requisite Indiana Jones fedora of certain white men in hot climes. But while Indy’s hat is sweaty and dirty and just, um, superhot, this guy’s has the stiffness of retail-bought pseudo-adventure. He’s carrying a small video camera, which he only periodically brings up to his left eye. He seems intent and distracted as he nears me, scanning the site for some unknown quantity. If I knew what he was looking for, I might be able to fill him in. After all, I’ve researched this site. I’ve interviewed one of the archaeologists who dug up the stage he’s awkwardly scaling. But more than that, I just want to talk to somebody for a moment. It’s nice to see real, live people, and I feel a minor bond with them. They like archaeology. I like archaeology. Three cheers for archaeology. 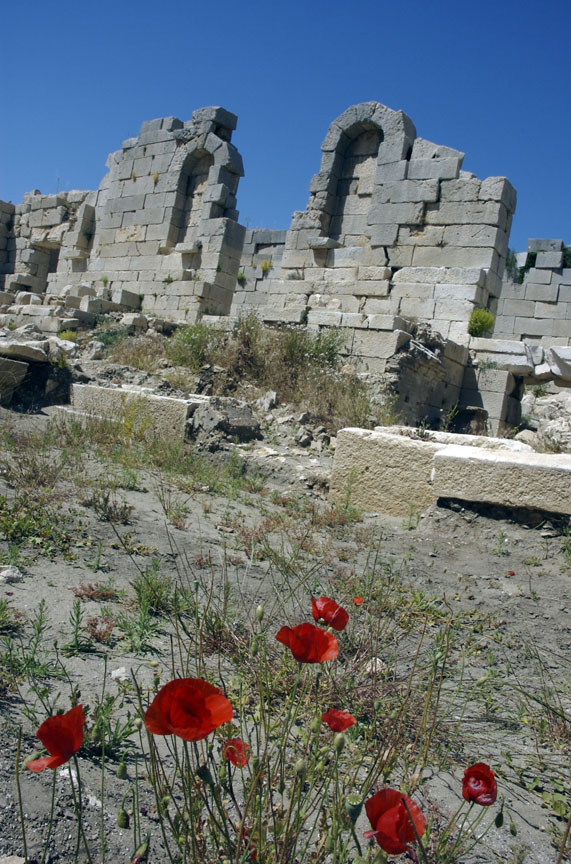 “Are those archaeology students with you?” I ask.

He doesn’t acknowledge in any way that I’ve spoken, though the set of his jaw lets me know he’s heard me. Nor does he bother to make eye contact. I’m about to ask again when he finally answers me in the nastiest tone I’ve heard since the smacktalk event with Viking Girl in Kashmir.

And all it consists of is this: “No.”

You know what sucks about the living? The sucking part.

Christ. I’m going with the dead.