Before I return to Antalya, where I am to catch a flight back to Istanbul, I explore the ruins of Rhodiapolis, a small Lycian city, insignificant except for its most famous native son: Opramoas. He was sort of the George Soros of his day, a rich, philanthropicallyâ€”and politicallyâ€”minded Lycian who donated tons of money to dozens of cities after the earthquake in a.d. 141 flattened them. He had the ear of emperors like Hadrian.

His tomb is a jumble of stonesâ€” 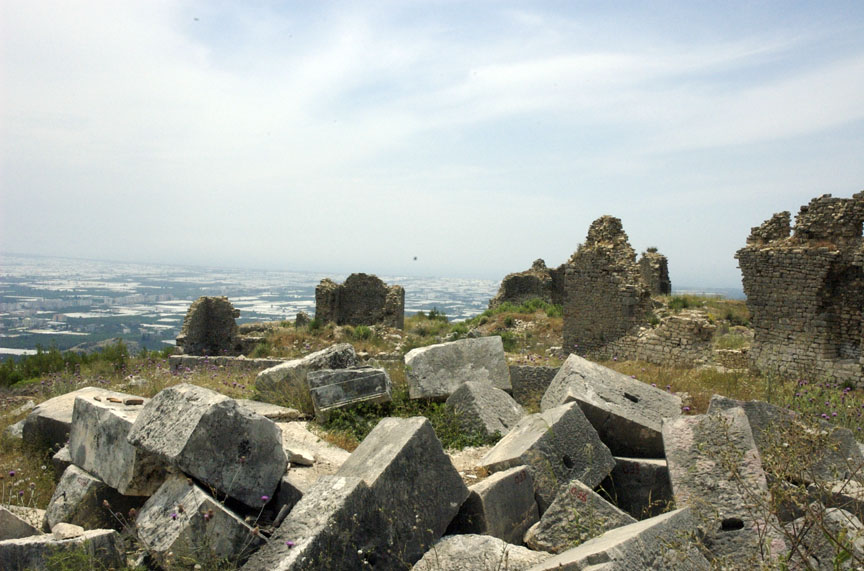 â€”most of them covered with Greek inscriptions. 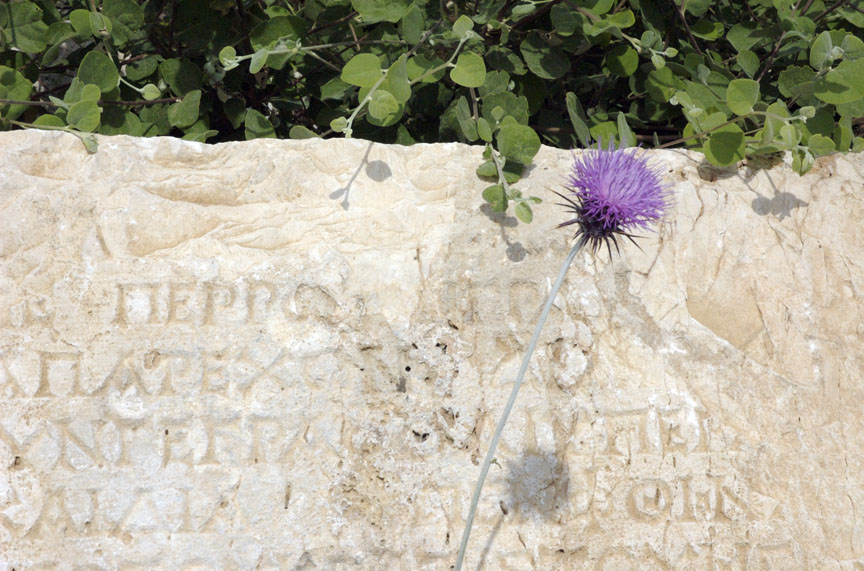 I ask the archaeologists where he got his money. The answer is that he was rich because he was rich. Meaning: self-made men didn’t really happen so much in the ancient world. Opramoas was no Oprah, no Bill Gates, no Ross Perot.

Looking at pile of water pipes someone casually laid down in a corner of the baths 1,900 years ago, where they have lain ever since, I entertain myself with the idea of a Lycian Ross Perot, a comical little man with big ears and a floppy toga, speechifying his straight-talkin’ bullshit about the high capital gains tax on the sale of slaves.

Archaeologists are beginning to make order out of the chaos that is Opramoas’s tomb. When they actually get to the center, I guess we’ll know whether he was shrimp size too.

Back in Antalya, I visit the museum. There are few Lycian artifacts here; most were removed from the sites by Europeans in the 19th century, including the famous Nereid Monument in the British Museum, which was taken from Xanthos, the capital city of Lycia. (Patara had been Xanthos’ port.) Like a lot of countries plundered by 19th century European adventurers, Turkey has agitated to get some of these artifacts back.

There is, however, the tomb of one Aurelia Botanie Demetria. Unhelpfully, it was found in no place more specific than “Asia Minor,” the classical name for Turkey. It dates to the same time as the stone sarcophagi at Patara, around the 2nd century a.d. Unlike those tombs, however, this one is marble and incredibly ornate, with columns and elaborate reliefs. At ten feet long and six feet high, it’s a roomy place to take one’s eternal repose. Atop the lid are high-relief, life-size statues of Botanie and her husband. They lounge casually on their sides, resting on one elbow, plates of food before them.

Botanie has wide severe eyes that beam a bleak anger; she’s been wronged and has no faith things will ever be put right. Startingly, her husband’s head is unfinishedâ€”a mere smear, the features still waiting to emerge. Paradoxically, this rough blob rises above berobed shoulders that are so hyperrealistically rendered I want to rub the folds between my fingers.

The inscription on the tomb reads:

I Aur(elia) Botanie Demetria have had this sarcophagus made for myself; I desire solely my body to be buried in there and immediately after my death the tomb to be enclosed with iron and lead by my successors.

What story must lie behind those bitter eyes, that unfinished face, that iron and lead solitude?

Later, I have dinner on the patio of a restaurant overlooking the harbor: fresh fish and an Efes beer. (Okay, two beers. Well, three.) As it has for the last 1,800 years, the Roman tower to my right aims its round massiveness across the harbor at the Bey mountains I drove through just two hours before. It’s easy to imagine people standing in front of it, perhaps early in the morning, their faces to the harbor, the sun warming their backs, thinking, It’s going to be a fine day.

The Cypriot waiter keeps interrupting me to bat his blond eyelashes. It’s early in the season in this tourist town, and I am that always intriguing thing: a woman alone. Better yet, I’m a woman drinking alone. Writing in my notebook seems to elevate me above mere looking-for-it status, because he is flirty but not disrespectful. (Actually, only the Istanbul carpet sellers have treated me like tits on dollar bills.) He knows he’s cute, and a guitarist, too, lithely soccer-hot and tan. He might as well give it a shot.

He writes my name in 1984-style block letters in the front of my notebook. 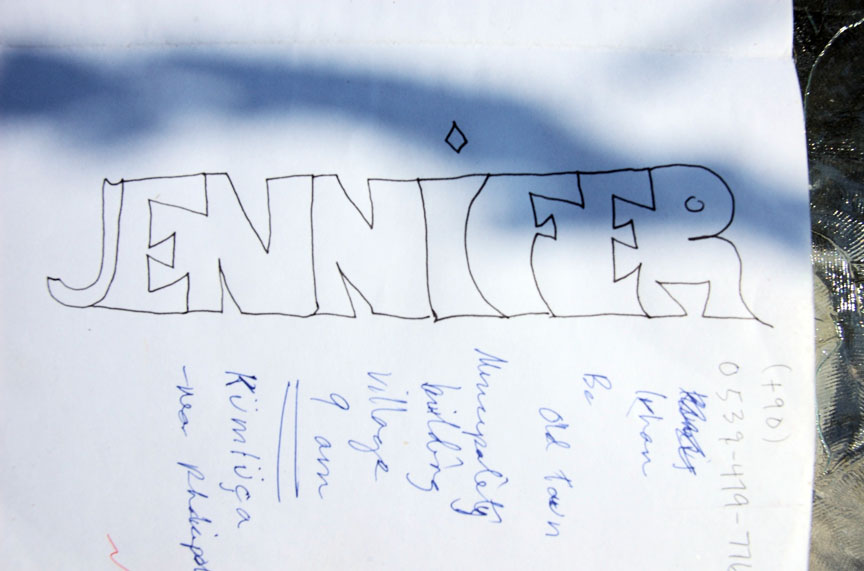 I haven’t done anything that girly since perhaps ever.

The music is ear-disabling: air raid sirens over a techno beat. “Do you know this song?” he fairly shouts. I admit that I don’t. He sings alongâ€””al-co-hol, al-co-hol, al-co-hol…”â€”and gently pumps his fist in the air as if testing a faulty ceiling.

When I pay, he hands me the change and a business card for another cafe where he plays the guitar every Sunday night. He urges me to come. Not traditional music. Modern music. I will enjoy.

But by Sunday I’ll be gone. I’m returning to Istanbul for one last night.