Thanks to Thai Airways, I have a web signal. I’m not one of their VIP customers, just a Cathay Pacific Economy-Class plebe sitting in a cheap cafÃ© one floor below the airline’s VIP lounge. But I am an experienced poacher, so here I am in the Hong Kong airport with a freshly bagged signal caught with my (inter-)net. I’m eating room-temperature cheddar on a cracker and blueberry yogurt. Two hours on the continent of Asia and I am already chipmunking the dairy in anticipation of weeks without.

The 16-hour flight from New York to Hong Kong was remarkably unremarkable. I expected a monumental journey, a rite of passage even. It seemed that the longest flight I’ve ever taken should have a narrative arc somehow. It might start with keep-my-chin-up coping enabled by Carl Sagan’s Contact. (His deep compassion for humanity works wonders on improving one’s tolerance for snoring jerks, monkey-howling babies, and cruelly pointy elbows.) I’d read, I’d eat, I’d try to sleep. Rewind, replay.

An empty cabinâ€”alas, mine to photograph but not to sleep in. 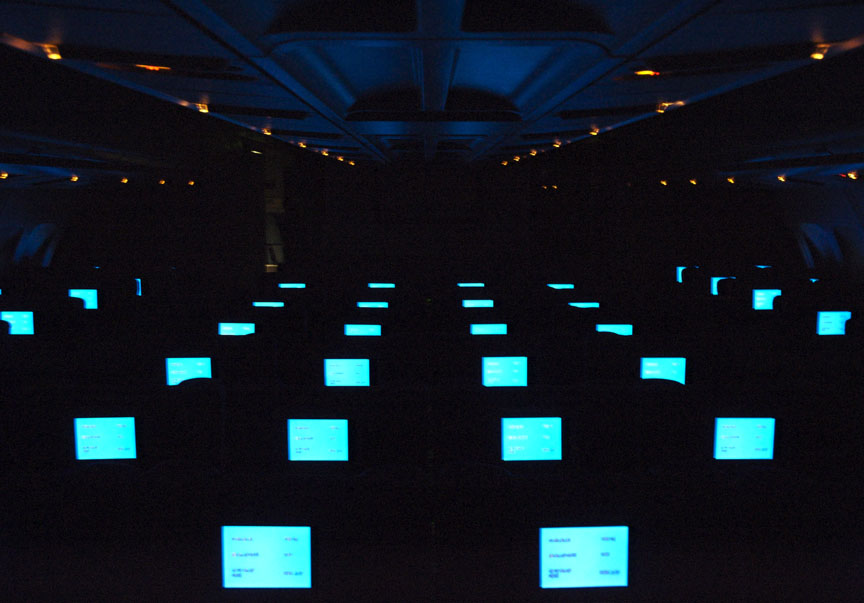 There would be an in-flight movie, and then another. Peeing would become entertainment. Waiting on line for the bathroom would offer the chance to stretch and thereby annoy the flight attendants. That might be a ploy to get some scant personal attention in this vast cabin of intimate yet anonymous strangers.

In a sane worldâ€”perhaps a beautiful futuristic world in which they will recoil in horror at the pain and length of early-21st century air travel, similar to how we react to the idea of Stone Age trepanationâ€”halfway through might be the end of the trip to a place ten times as far. But not on January 31, 2007. Not on flight CX831 from JFK TO HKI. Halfway through would mean just that: another eight hours to go.

Tiring of the read-eat-watch-sleep cycle, at some point I would realize I was peering into the eternal essence of Boredom itself, the Platonic form exposed for me right there in seat 59G. It would be beige and too cold. It would be beautiful and horrible at once. I would quietly weep from the burden of such knowledge.

And yet the flight would go on. I’d eat foil-wrapped food of middling quality. I’d sleep the plane half-sleep, in which you never quite stop hearing the hum of the engines or the squeak of movie voices through people’s headphones.

I’d wonder if I was going to make it. I would think about how desperate and lonely and good we all are, and how everyone everywhere deserves compassion. The landing gear would thump out from beneath the thorax of the plane, we’d land on the runway in a scrape of tires and speed, and I would venture into Asia solid in the knowledge that I had gone through something important. A trial, and I had made it. It would be useful for the rest of my life, or at least this journey I’ve just embarked on.

Instead, I pretty much just slept.

Thank you, two weeks of insomnia caused by preparation for this trip coupled with a low-dosage but equally effective generic equivalent of Xanax!

Also, I have to thank my rowmate. A man in his twenties had the other aisle seat in row 59. There were two empty seats between usâ€”one extra apiece. A treasured thing when you’re flying economy. We each commandeered our extra space, his feet in his, my ass in mine. But eventually, he feel asleep in his aisle seat, leaving his extra empty. An hour passed, and then another. I’d been lying on my side, trying to cram all 5’10” of me into the space. So I asked him if he minded if I use his other seat for a while. He said it was no problem. I lifted the arm rest and stretched my toes and ankles half away across the seat, making sure my feet were completely covered by the blanket. It’s not nice to flaunt your dogs so close to someone, particularly when he’s let you invade his valuable real estate.

It turned out to be more than “a while.” I slept for most of the next eight hours.

I wasn’t exactly comfortable, but I was much less uncomfortable than I had been before. On a 16-hour flight, his gesture was more than a small mercy. It was an immense act of kindness. Thanks again, stranger. You kept me sane.

The temperature in Hong Kong right now is about 65 degrees. Pretty much ideal. I haven’t been in fresh air in about 24 hours. But to actually inhale that fresh air, I’ll have to pass through immigration. Ack. But I still have four hours to kill before my flight to Beijing, so I might as well.

You know you’re bored when queuing up for bureaucrats seems like an appealing way to pass the time.

Here’s a portrait of the moon from the airport. 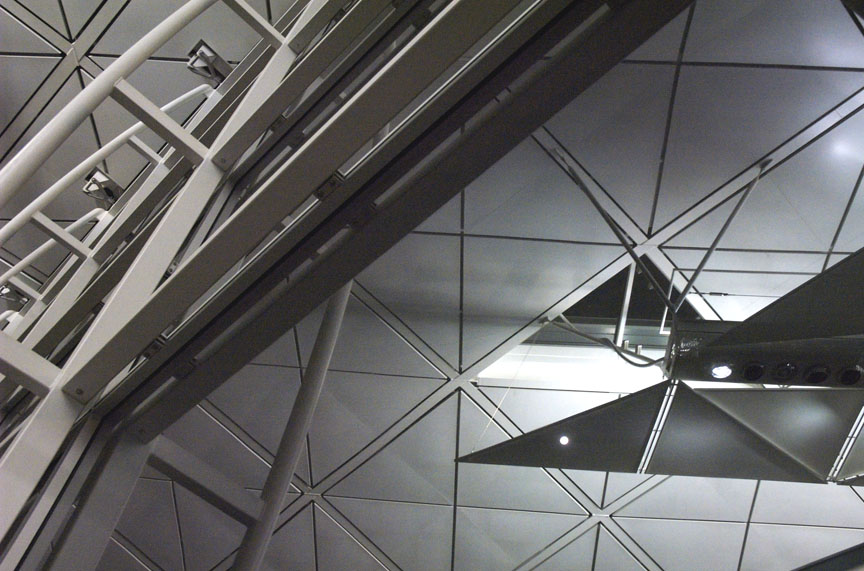