Mao’s pickled corpse lies unseen by these eyes, but on my first full day in Beijing I did check out his portrait. Lording as it does over Tian’anmen Square and the entrance to the Forbidden City, it’s impossible to miss. 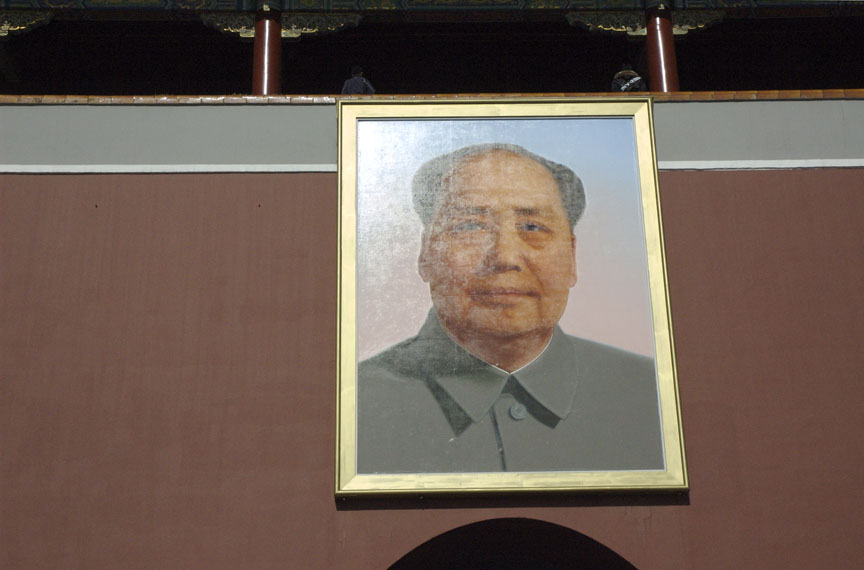 That quintessential Mao collar is excellently crisp. I don’t think I’ve ever been so unwrinkled.

It took me a while to get to Tian’anmen Square. Beijing is deceptively large. You look at a map and calculate the walking distance from A to B. Ten minutes? Fifteen at most? But instead, itâ€™s 30. Have that happen a few times and suddenly you’re hours in and not really all that much closer to your destination. Three hours later, youâ€™ve taken in more restaurants, banks, and neonâ€”the siren sisters of Beijingâ€”than you could ever have the belly, funds, or pupils for.

The smog has clogged your nose with brain-grey snot, and the vendors who cook the most amazing street food ever are nowhere to be found. (Jian bing guozi is a sort of pancake cooked on a hot circular griddle right in front of you. It’s layered with fresh egg, scallions, four mysterious, gloppy sauces, and a deep-fried shell. Neatly folded into a little baggieâ€”with handles!â€”and a napkin that keeps your digits from burning, it costs a whopping two yuan. That’s about 25 cents. It keeps you full for hours. New Yorkers, get thee to Chinatown-ery now. )

Suddenly you’re exhausted and wonder whether it might be better to catch a cab back to the hotel and nap, just for a little while. But now that you’re several hours deep into something that’s veering dangerously close to a goddamned death march, it seems a waste of energy to turn back. So you soldier on. 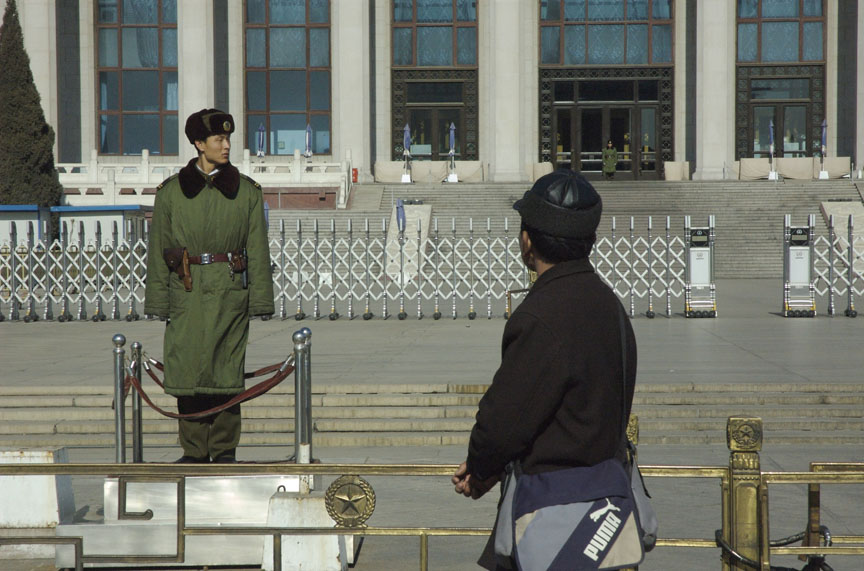 He’s guarding Chairman Mao Memorial Hall, where Mao’s aforementioned pickled corpse is stashed. In Beijing, you almost always see soldiers in profile; as they stand on foot-high platforms in front of embassies, important financial and governmental buildings, and historical sites, they aim those stern (yet mostly baby-faced) visages over one shoulder and then the other.

I’m afraid to take their picture. I think I should be. Apparently, I’m lucky I even got into the country. Last night I met an expat American journalist who told me it’s surprising I didn’t simply get blacklisted after applying for a J-visa. Gulp.

But the word on the street is, being a journalist rocks. The college kids who adopted me in Tian’anmen Square thought that my travel itinerary was a most amazing thing.

They had been sent by their English-language professorâ€”one Brian from Texasâ€”to practice their skills by making “international friends.” When I was first approached by Lu Changâ€”take a look at her charming self hereâ€” 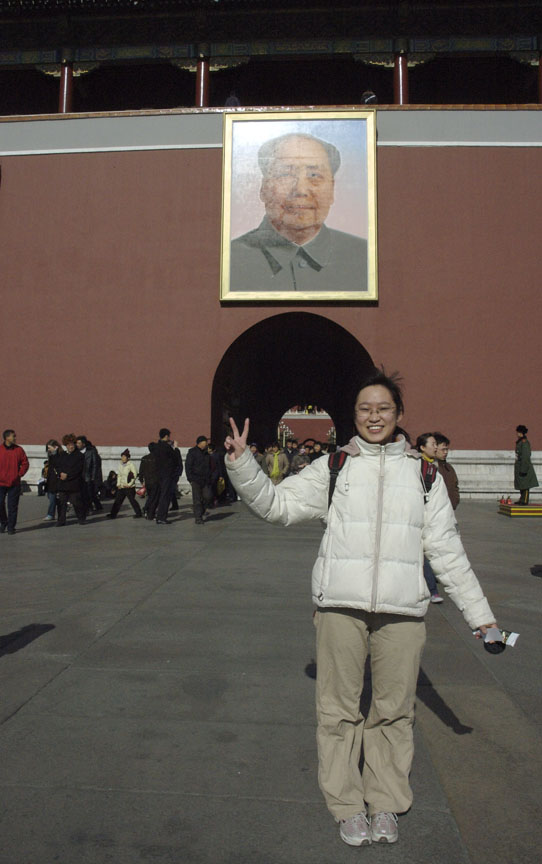 â€”I of course thought she was trying to sell me something. There is a common scam in Beijing where “art students” take you to tea and you get stuck with a bill for 2500 RMBâ€”an astonishing $360 or so. But I figured that one must be an idiot to fall for something like that. Plus, the only hawker I encountered was a woman who pressed her shoulder into my elbow and repeated “Butterfly! Dragon! Frog!” as she flipped through placemat-sized prints. It was over pretty fast.

It’s a rare thing in this world to find two strangers so equally delighted to speak to one another, but such was the situation with Chang and I. We each had our reasons. Once again, she had gotten up the guts to chat up a foreigner; she had been rejected before. (When I suggested these unfriendly foreigners probably assumed she was trying to sell them something, she looked hurt and dismayed.) And I was enthusiastic. I had been wandering around in a jet-lagged fog, pretty content but nagged by a little internal voice that worried, What the hell am I doing by myself 9,000 miles from home in a place where I can’t talk to anybody? I was lonely already, and it was only day one of my supposedly grand adventure. I hardly seemed worthy of it.

So we wandered the outer grounds of the Forbidden City and Zhongshan Park for hours. The conversationâ€”about her life, my life, Beijingâ€”rarely faltered, but sometimes she would come out with questions more often found on online dating sites. Queries like, “Who was your puppy love?” or, “Who is your idol”? It was only later on when we met up with her schoolmatesâ€” 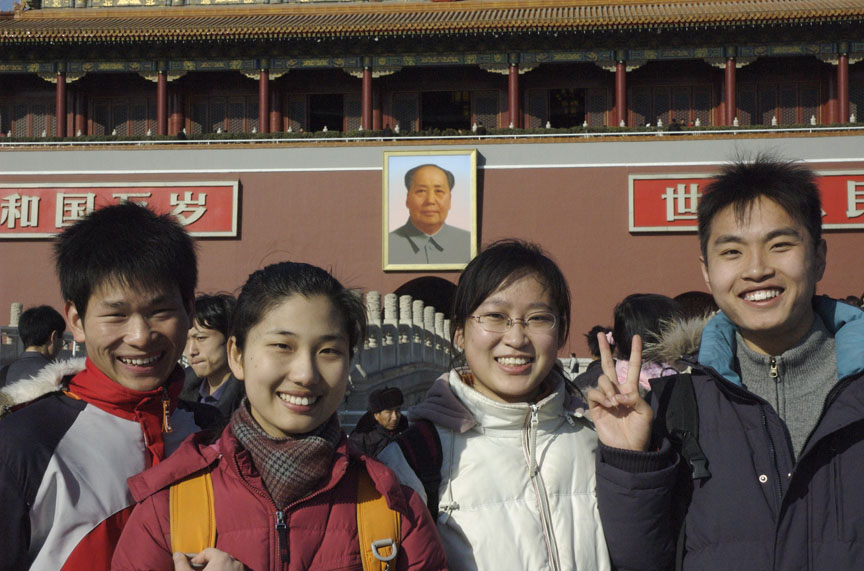 â€”that I found out where those questions had come from: Texas Brian. Over tea and dumplingsâ€”my suggestionâ€”I saw Colin (left), Zhang Xuangji (second from left), and Fan Xiang (right) flip through printouts loaded with such clunky icebreakers. I don’t know if their professor came up with them himself or if they’re found on an established curriculum, but, well, they need some work.

On the other hand, Xiang also had flash cards with awesomely rude phrases. There were five variations alone on the phrase, “Don’t act like an ass!” Perhaps Mandarin has such a rich array of ways to tell people to stop being idiots that it requires a bevy of translation. I suspected this earlierâ€”on more than one occasion my husband, Steve, has expounded on the exquisite grossness of the curse “dog fart”â€”but such expansive vulgarity makes Mandarin a compelling tongue.

Luckily, I have rarely felt the need to use any such phrase during my loooong walks around Beijing. In fact, in comparison to Cairo or Luxor, Beijing is a gentle breeze tickling a baby’s chin with a lotus flower. (Beijing makes me angry at Egypt all over again, but that’s another story.) My next post will be all about hutongs, the traditional (and quite medieval) dwellings in the city, and why I have the best feng shui in Jiaozi Hutong.

Finally, a personal note. Dear friends of mine back home in NYC have a band called Knife Fight. They rock. They have great hair and suitable baditude. But they can only dream of having a band photo this cool: 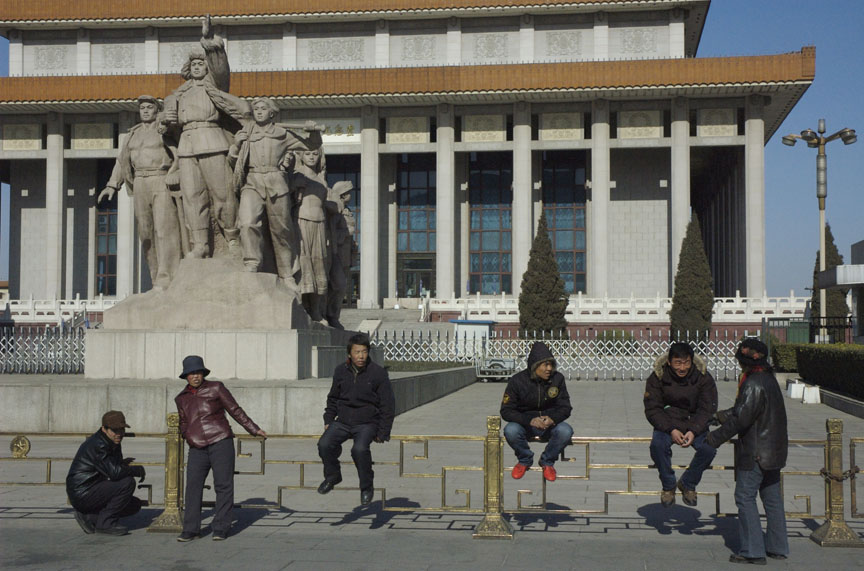