I have the best feng shui on Jiaozi Hutong.

You see, my room in the Jin An Bin Guan (Zen Hotel) looks south. Apparently, in feng shui, south is the most auspicious direction for your home to face. I had dinner with a Beijinger named Angela Wang last night who told me that homes in the city with a southern exposure cost a truly extortionist amount of money per square meterâ€”the most expensive of any exposure.

Most of the people who live in the hutongs I can see from my room have neither southern exposures nor worries about the cost per square meter (well, not entirelyâ€”but more on that later).

The view from my room. 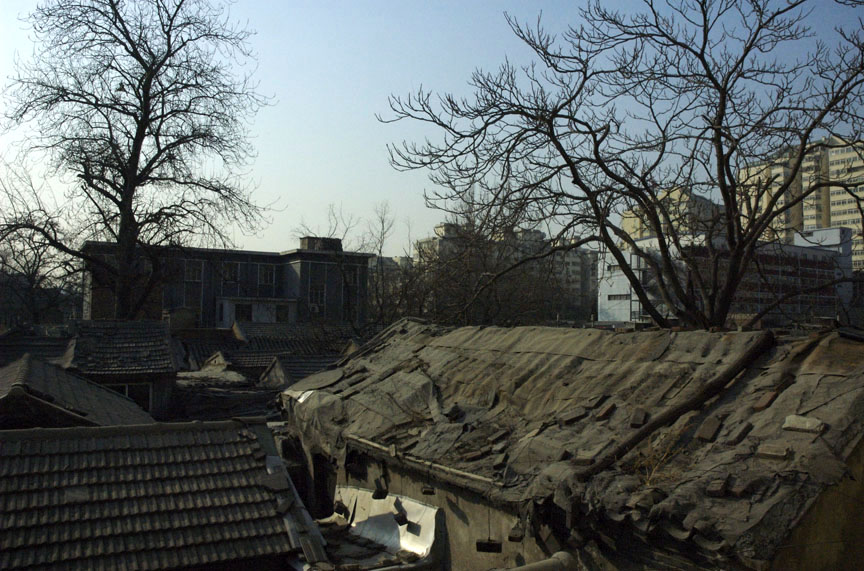 Hutongs are the narrow alleys and lanes formed by the one-story brick-and-mortar buildings traditional to Beijing since the 13th century, when Kublai Khan established a capital here. They weave in labyrinthian coils between those foot-wearying avenues on which I’ve taken so many death marches. They were built on an east-west line to capture that southern exposureâ€”which, as Angela pointed out to me last night, at Beijing’s latitude guarantees sun in the winter and shade in the summer. They had inner courtyards for privacy and fresh air.

Early on, the hutongs surrounding the Forbidden City were where aristocrats had their quite swanky residences. The restâ€”the vast majorityâ€”housed regular folks. Now there are no hutongs left in the city center, which is dominated by highrises, and it’s only the poor who live in hutongs.

Electricity is sort of available. Plumbing isn’t. Public bathrooms are everywhere in the hutongs. As a New Yorker, my first reaction was that this was responsible urban planning in a density populated city. The people’s party had given the people a place to pee!

After a couple of days, though, I realized the preponderance of bathrooms probably indicated just the opposite: terrible urban planning coupled with jet-powered governmental malfeasance. The reason there are so many public bathrooms in the hutongs is that there are no private ones. That sure puts the “community” in “communism.”

One of the public bathrooms.

My ability to immerse myself in the hutongs stopped at the bathrooms. I dared not venture in.

I can’t find reliable numbers, but it’s safe to say most of the hutongs are gone. Hundreds left from what used to be thousands. The government pays people to leave the hutongs and resettle in the suburbs, where they might get that crazy newfangled indoor plumbing that’s all the rage with the kids these days. You can’t blame people for taking off. Then the hutongs are bulldozed and more modern housing put up in their place.

The hutong atmosphere is alternately crackling with action and centuries-old sleepy. Men seem to be quickly moving in and out of doorways at all times. Older men meander with their hands loosely clasped behind their backs. Old women supervise, telling everyone else what to do. Slumping teenagers watch TV. Children throw stuff or jump over things. Vendors of round coal bricks, sweet baked goods, meat, meat, and more meat, and other, more mysterious wares drive their carts through the alleys. Some call out what they’re selling, and the more prosperous blare a recording through a small yet powerful speaker. Bikes and mopeds weave through the on-foot. Laundered blankets and sheets hang drying in the sun. Skyscrapers pose icily in the distance. Crumbled piles of destroyed hutongs offer a warningâ€”or a promiseâ€”just across the street.

North of the Forbidden City, some of the hutongs are successfully making the grade for next-generation tourism, which aims to be more B&B than backpacker, more coq au vin than chicken feet. Jiaozi Hutong, which is in the Xuanwu area in the southwest of Beijing, is just plain-old poor. I wonder if a very unusual doorway such as thisâ€”

There’s a whole other Beijing I’m not showing you. It’s very neon, and very tall, and not very interesting. You can find this public face of Beijing anywhere. Try any Chinese media source, where you’ll also get a stupor-inducing Party-line spin about Biejing being a “world-class city.”

Sure, okay. But what the propaganda would like you to overlook is the fact that the world kind of sucks a lot. Most of the world is starving, violent, polluted, or diseased. So hell yeah, Bejiing is the world. So is New York. So is your hometown.

There is a hyperconsumerism to the New Beijing that’s fascinatingâ€”and just as expensive as any other international cityâ€”but in the end it’s too familar in ways I don’t like and too alien in others. I know overpriced city life. And I hate shopping.

The hutongs, on the other hand, are ostensibly exotic to my experience, and yet I feel easier there, even thought the language barrier is most extreme. People eat, they sleep, they sell things to one another, they ride their bikes, they yell at each other, they kiss their kids, they spit everywhere, they watch TV or me as I walk by. I point at things with a smile and a nod and a few Mandarin words and soon I have something to eat. Life is very essential here, in a way. 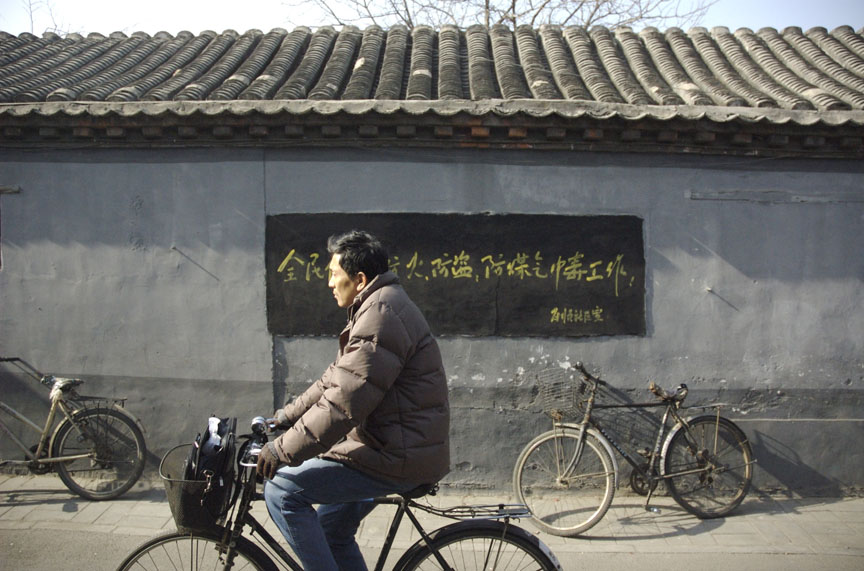 This isn’t my requisite “look at the poor but happy natives!” moment apparently required of the Western tourist abroad. At least I hope it isn’t. I’m not saying they’re happy. I’m just saying they’re there. Poor, but present, when Beijing would like you to believe otherwise. (So would D.C., Paris, or London.)

For some reason it makes me have a better understanding of the childhood of my mother and father, Eileen and Jim, who were both very poor. It makes me understand how if you can get the hell out, you stay the hell out at all costs, and perhaps you might even scorn those who don’t. After all, if it was impossible, you couldn’t have done it. Yet to speak of being born poor as just slight bump in the roadâ€”something that can be simply overcome with some good old-fashioned hard workâ€”would make it seem that getting out had been easy. And you know how damned hard it was.

Some of the hutongs are relatively prosperous. Just south of Tian’anmen Square, in an area called Qianmen, I got a massage in a barber shop owned by this woman, Red, and her husband:

It’s an area that sees some foreigners because there are several hostels nearby. Places to check email or make cheap international calls abound. While her husband gave a hip young thing a buzzcut, Red gave me what was probably the most distracted massage I’ve ever received. But that’s because we were too busy talking. What she didn’t do for my muscles she did for my spirit.

Like many people I’ve spoken to, she wanted to know if it was difficult to get a visa to the U.S. I told her that’s what her countrymen had told me, so probably yes. Holding my leg in the air while she kneaded my calf, she considered the possibilities.

First she suggested that I should hire someone to clean my home because I am obviously too busy working and traveling to clean. And, you know, if I looked her way, she wouldn’t be upset. She laughed slyly. I laughed too. She then suggested I should open a beauty parlor, and if I needed some help, well, she and her husband just happened to have the experience to do me a square.

“You don’t have to do anything. You have everybody help you. You just own the business,” she said, her fingertips rotating against my temples. “I think this is good.”

She stood up, grabbed my arm, and began to shake it briskly. I answered that I didn’t have the money to start a business. She shrugged, unconvinced. Of course I had the money. I was American. She shook harder, perhaps trying to see if money might fall out of my very skin. “I think you can do this.”

I rolled my eyes. She laughed.

After my clothes were back on, I stayed to chat for another half hour with her and her husband, a trim guy who reminded me so much of someone back home, but I can’t figure out who. We played with Red’s Chinese-English pocket translator, trying to find the difference in the characters for “email” and “website.” They wished I were staying another night in Beijing so they could have me to their home for dinner. I wished I were too.

On the walk back to the Zen Hostel, I realized there was something about the hutongs that reminded me of Chiapas. I think it was a sort of Schrodingerâ€™s Cat state of being that can belong to the architecture of poverty. Sometimes the decrepitude of a building hits a perfectly poised place between construction and destruction. In Chiapas, I had often been confused by a partial building buoyed by haphazard piles of bricks and painted a tropically cheery pool-blue, but was half undone in either direction. It kept its existential state undeclared. I would think, is this thing going up or coming down?

It’s much the same in Beijing, even though I know which direction the hutongs are headed. Even their shabby two-story brethren don’t have much of a chance: 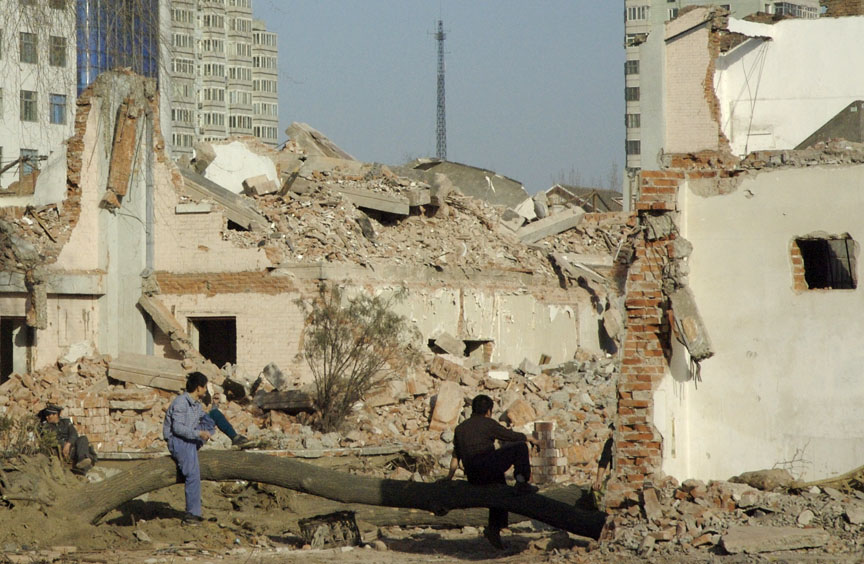 My room in the Zen Hostel isn’t exactly swanky. For one thing, it’s freezing. At least the shower spits a boiling-hot stream that might originate from the bowels of hell. The TV has one English-language channel, which has taught me how truly soporific propaganda can be. The walls are astonishingly dirty in a Mickey Spillane sort of way. There is actually a full hand of four-inch-long finger smears of a brown-red substance about six inches northwest of the wall outlet. Itâ€™s the perfect distance from the bed for someone to lean out, making one last effort to escape their tormentor and get helpâ€”but instead collapse, vanquished.

Yet I have the water, the electricity, the heat, the ability to get the hell out whenever I want. And I also have that thing we Americans are always so willing to pay a premium for: my own space. That’s why I have the best feng shui on Jiaozi Hutongâ€”because I can pay the per-square-meter cost for that southern exposure.

And so it has ever been, Mao’s Little Red Book or no. 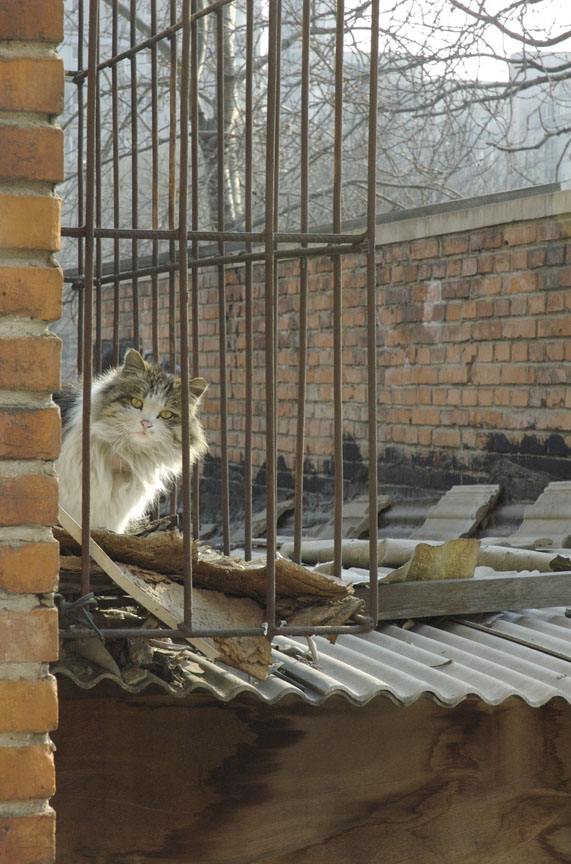 7 Replies to “The Best Feng Shui on Jiaozi Hutong”