Before I left for this trip, I wondered how much I would change. The undertaking seemed so huge, so monumentally challenging, that change seemed inevitable. And that was partially the pointâ€”to shake my perspective. But I worried. What if the world so altered me that I didn’t recognize myself anymore? What if, in the end, I became a stranger?

“Christ. I hope I don’t find God or something,” I fretted to Justin, an old friend, one night over drinks. He, bless his heart, laughed at me. “That’s unlikely. You’re the biggest atheist I know,” he said.

“Halle-fucking-lujah,” I agreed, and we clinked our wine glasses.

Kindness moves me. Mountains move me. Love moves me. Dogma does not.

However eh-leaning-to-hostile I remain towards organized religion, its accoutrements are nevertheless compelling. Temples, mosques, and cathedrals often have a very of-this-world opulenceâ€”so distracting, it seems to me, to the contemplation of the numinous, as Sagan put itâ€”that fascinates me.

Plus, they gleam. Ooooh. Shiny things.

The most famous temple in Chiang Mai, Thailand, is Wat Phrathat, a glistening tower of gold atop the mountain Doi Suthep, which you reach by climbing 309 dragon-flanked steps.

A white elephant is said to have brought a bone sliver from Buddha’s body to the top of the mountain in the 14th century. After completing the arduous task, it died. 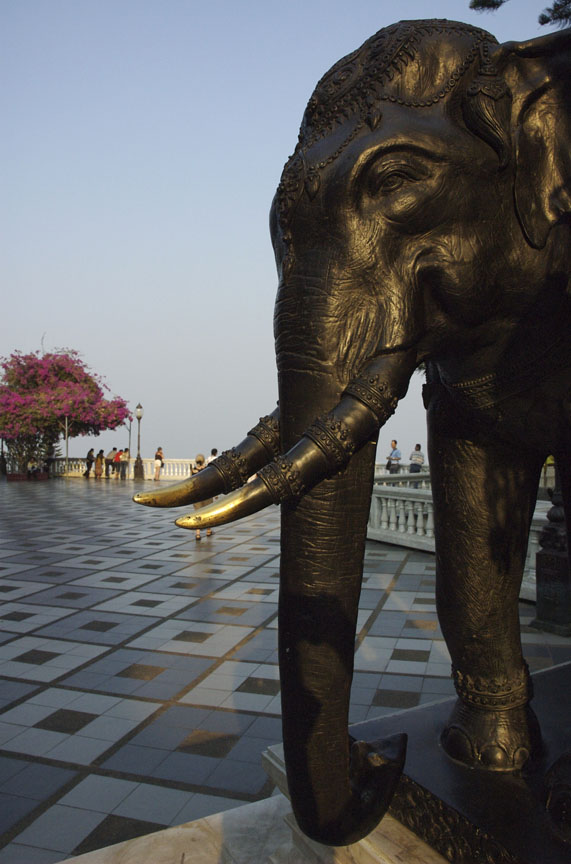 Gold paint reflects the blazing sun on the temple walls. Gold ribbons festoon the grounds. Flowers and designs are magenta and mauve and overripe orange, greens and blue like a park in paradise. It’s a banquet of color. It makes me hungry, and it fills me at the same time.

How are you supposed to remain calm in all this glitter? It’s very stimulating.

The walls of the temple are lined with metal bells the size of kids grades pre-Kâ€“4. Visitors are encouraged to ring them.

What is the sound of one hand clapping? Couldn’t tell you. The Zen koan has persisted for a reason, I guess, though I’ve always found it a bit gimmicky.

But this is the sound of one bell ringing: Doi Suthep Bell

And this the sound of twenty monks chanting: Monks Chanting

When you enter a Buddhist temple, you should get low to the ground. Not prostate, but perhaps lower than the depiction of Buddha. On Doi Suthep, I sat on my heels. I kept quiet. I tried to avoid eye contact with the monks. But this jostling family had no such qualms. As the monk put his hands on the crowns of the boys’ heads and chanted something quietly, they fidgeted and laughed and demandingly poked at their mothers. And they all laughed: Kids and Monks

Their cheery ease reminded me of something. I’ve always said that if I had a god, it would look like one of those jolly fat laughing Boddhisattvas, not a creature strung up and tortured as a testament to humanity’s cruelty, the brutality sanctioned by a god who would kill his own son to make a point.

Yet even after months in Asia, I remain godless. I’ve had thousands upon thousands of Hindu deities to chose from in India alone. The Elephant-snouted Ganesh is tempting, with his oversight over beginnings, obstacles, arts and sciences, intellect and wisdom, and writing. So is the monkey Hanuman, with his exuberant love of leaping a moral force in its own right, put to good use to save Sita from the demon Ravana. Plus, I like primates, regardless of their poo-flinging tendencies.

Still, I’ll take my nourishment from the kindness, the mountains, and the love.

Perhaps my most spiritual moment came when I got food poisoning. My body went into full-on storm-the-Bastille revolt. I didn’t call out for my maker, but I did get a little pagan. I believe I caught a glimpse of a Platonic ideal of physical misery. It seemed like a white beam of ephemeral light among the foul substances that accompany food poisoning. Wow, I thought. Now I know how bad this particular variety of misery can be. And it’s really, really bad. But it’s not killing me. I can handle it.

One less thing to be terrified of in this world.

And of course, I lived to tell the tale: altered by about two pounds, but still plain old me. Songthaew