Each restaurant along the cliff of Varkala has a table set up to display the catch of the day, which they hose down periodically to keep them glistening. Who knows when they were phoned in.

At Kerala Bamboo House, a waiter with gloriously glossy and wavy hair (exactly like Steve’s but black instead of blond) itemizes the options: fetal-positioned tiger prawns; the promisingly named butterfish; who-knew-you-eat-those barracuda; and a tuna. The tuna has been carved into like a cake, with neat slices removed from its side. This treatment seems nominally better, somehow, than what was inflicted on the enormous blue marlin I saw at a restaurant about 50 meters back. Someone had popped a small red apple onto the tip of itsâ€”depressingly, in the endâ€”ineffectual proboscus.

I go for the butterfish. Served with french fries and a salad, it’s 150 rupees. That’s about $3 US. I ask if they have beer.

“Beer, cocktails, marijuanaâ€¦” He offers me a fetching smile.

“Well, I don’t do that, but I’d love a beer,” I laugh, and then stop laughing. Christ. When had I become such a Pollyanna?

Maybe it’s the constant clip-clop of rain, the tinkling of runoff through the drains, that elicits the sober in me. Or maybe it’s because it’s the end of the season. The Ayurvedic treatment centers are treating less of the whole body and more parts of it, as that is lucrative but short-term; the Tibetan crap sold to Westerners in questionable pants is deeply discounted; my hotelâ€”a single bungaloo with private bathroom, double bed, mosquito netting, and private porch with two cozy chairs and a table, on landscaped grounds, is only 500 rupees a night. This is a whopping 1/4th of what it cost two months ago.

This time of year, Varkala is sunny most of the day, but about 4 pm, an impressively oppressive storm rolls in. 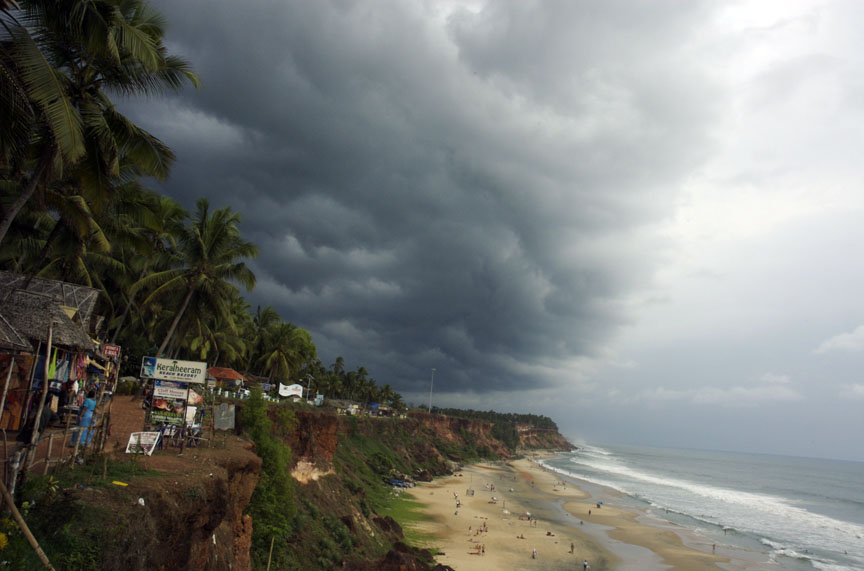 And then it pours most of the night. It’s not quite time for the monsoons yet, but these rains have people saying they’re coming early. (“Global warming,” they intone with a sage nod.)

The butterfish arrives doused in a lemon-chili-garlic sauceâ€”fresh, fiery, rich. It’s spring! But the limp salad and soggy chips land me right back in the-end-of-the-season sensation. So does the bang of thunderstorms on the roof of the terrace, where I cannot see the sea for the rain’s density.

The retreat to interiors begins with a retreat from rain. Shelter becomes necessary again after seasons outdoors. And maybe there is a slight chill: you find yourself wishing for another layer. Nothing heavy, just something for your shoulders. And then the feetâ€”wow, socks. The flip flops are getting tiresome, always clacking behind you like an irritated duck. It’s pleasingly novel to wear a sweater. But before you know it, the cold has come. And then the first bone freezer has you pining for the stupifying heat.

Of course, it doesn’t work that way in Kerala. It’s only getting hotter here. The intense stickiness that keeps blanching my clothes with damp zones that are potentially embarrassing is nothing in comparison to the spots I’d sport two months from now.

Yet you can feel the ending here. People are closing up shop. They’ve made their moneyâ€”or haven’tâ€”for the season. The atmosphere is resigned, with minor touches of desperation. One restaurant owner offers to sell me his baby girl. It’s a joke he’s almost tired of making.

It storms so hard the power goes out. The butterfish becomes an undifferentiated mass of sharpness and sauce on my plate: lemon, garlic, bones, viscosity. I poke for a while but then abandon it. The beer is gone, too, so I might as well go. I call out to the waiter just as the power comes back on, and the music heartbeats into life at a cardiac-arrest pace: thumpthumpthumpthump. I leave before the power goes into a coma again.

As I near the town helipad, it does. A shroud of darkess enfolds Varkala. Even the noise of the surf seems muffled for a moment. This is my third power outage in Varkala, so this time I am prepared. I flick on the flashlight. At first I don’t recognize where I am; it’s as if the darkness hadn’t changed the light but my actual location. I’ve transported! But then the lightning rips seams in the sky and I spot the way down to the far end of the beach.

I head down the winding path. The $2 flashlightâ€”which I had picked up as an afterthought while waiting on a supermarket queue in Kunming, Chinaâ€”becomes my best friend: The beam holds my hand. I reach the broken cement bridge I had crossed earlier by jumping from rock to rock, but it is now gushing with a red-mud torrent that threatens to take my feet from beneath me. A French couple in well-trod Tevas approach; I wave them off and superfluously explain in bad French why the way is impassable, which they smile through politely even though my knee-deepness says it all.

We cross downstream, towards the ocean. They head up the stairs to the road, but I hang back. The beach is black and mine if I want it.

The rain comes sideways as I near the foam-tipped tide. The air is like saltwater taffy: sweet and too much. A wave suddenly crashes with more force than I expect, and I hustle backwards with that abashed giggle of the ocean drenched. It’s embarrassing to be outwitted by a wave. The storm is right overhead: lightning cracks on the heels of the thunder from the previous bolt. It seems to dive right into the water between two lights that blink from the prows of fishing boats. Christ, I think. I shouldn’t be near the water. I could get electrocuted!

On Lake Hopatcong, where I grew up, someone died every summer from being shocked while swimming during a storm. It always seemed to happened in July.

I used to love to swim in the rain. A world of soft water. The tapping of droplets on the surface just breaths from my ears.

Maybe I am being silly, overly cautiousâ€”a Pollyanna, even. Could I really be in danger from submerging three measly toes? Or my feet? What were the chances that going up to the boniest protrusions of my ankles was life threatening? Technically I would only be skin deep, right?

It is so tempting to go further. Swimming alone at night while a bit tipsy on the most current-rattled beach in southern India while the maybe-monsoon rages during a power outage is so fantastically stupid that I feel almost protected by it. It’s just too scripted in a B-movie kind of way to actually enter real life.

I back away regretfully to a respectable, safe distance. Pollyanna. As the lightning continues to divide the sky, I wonder: What would it be like to be electricâ€”just for one shocking moment?

One Reply to “Pollyanna”