The people I speak with back home are listless and miserable, suffering through frigid air and snow, burdened by the morbidity that sets in when it seems like there will never be warmth or colorâ€”Christ, even hopeâ€”again. Thanks, February, you bastard!

Winter in Xi’an, in the Shaanxi province of north-central China, is no different. But here, the naturally gray winter sky, which is often foggy to boot, takes on a verdigris cast from the remarkable pollution.

I’ve never encountered everything like it. On Monday, the worst day, it was like being on another planetâ€”one with an atmosphere that has an entirely different chemical makeup, and is warmed by a sun much less powerful than ours (which is like a C studentâ€”merely average). The sun was clearly shining somewhere, but the smog was so low to the earth that I was kicking through it. That day, I saw more people wearing surgical masks than on any other.

Here’s an example of the ogre-ugly light in Xi’an, taken at the Shaanxi Provincial History Museum (itself a great place to visit). 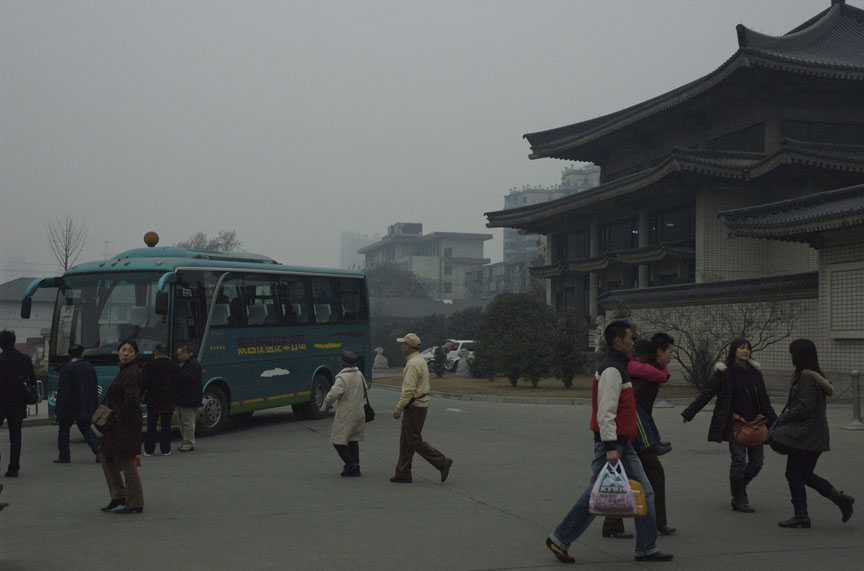 In this sort of environment, color becomes more than something that catches your eye. It becomes nourishment. Last February in Cairo, I saw lattice-climbing flowers whose fuchsia glow literally took my breath. I gasped. Tears blurred my eyes. Maybe it was simply jet lag (compounded by my tendency at the doddering old age of 34 to get quite teary when it comes to natural beauty). But I think that after months of monochromatic winter New York, I was being reminded of something within me that I had curled around protectively, something that would otherwise wither in the cold and darkness.

Such has been my relationship with both Xi’an’s skies and Xi’an’s bright colors. Humans have a large hand in both. Ostensibly I came here to see the Terracotta Warrior Army, which has been rendered by two millennia as drab as the dirt they’ve been buried in. Their colors have been stripped by time.

They’re no less remarkable for that, however. 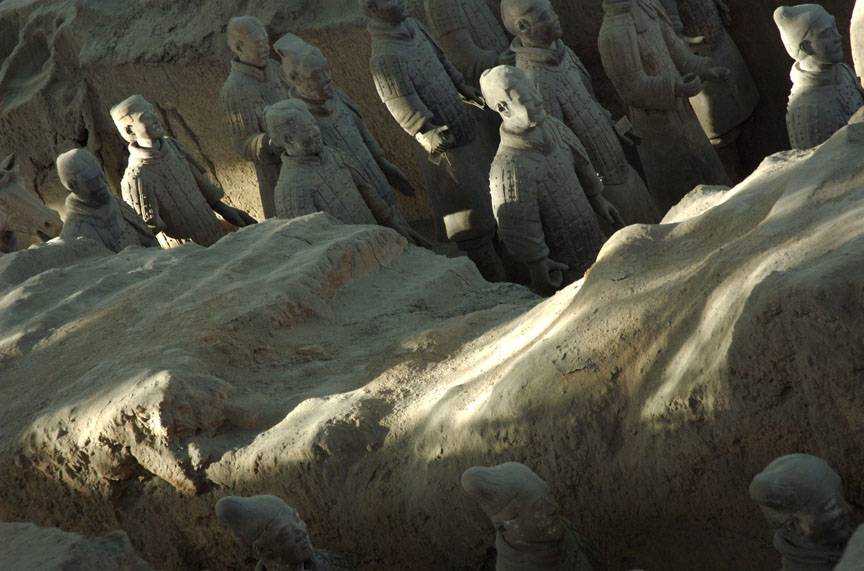 I did take in my share of ancient sitesâ€”it’s hard not to in Xi’an, the imperial capital of China for nearly 2,000 yearsâ€”and I also did two interviews. But mostly I wandered in modern Xi’an, which for all of its pollution is a pretty hopping city with many beautiful buildings and a 14th-century wall that encases the downtown area in 8.5 miles of 40-foot-tall brick and a now-shallow moat. Just amazing.

Here is the South Gate. 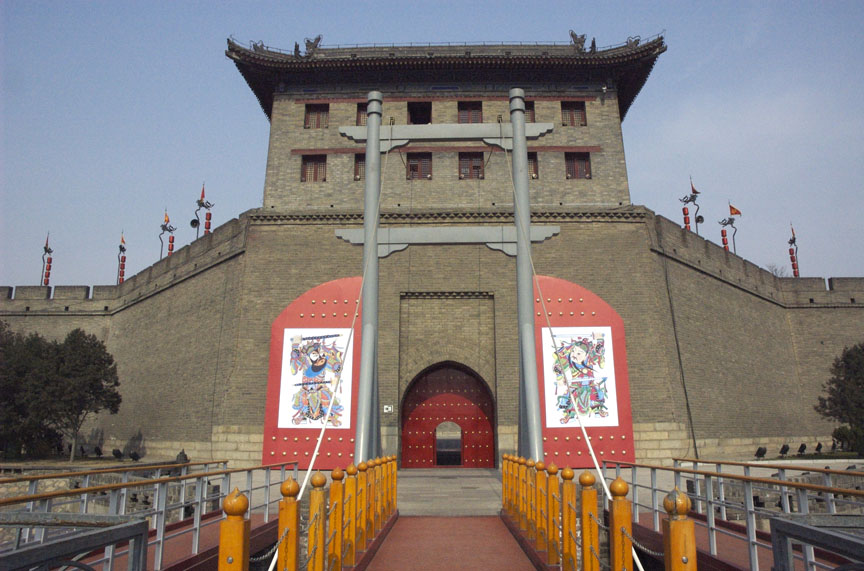 You can walk or bike atop the entire wall. For three hours I walked it with Leo Ye, an urban native and a freelance interpreter for the U.S. construction company Caterpillar, who proved to be my intrepid guide to all things Xi’an over the next few days. Leo has a pass to visit all the tourist sites in two provincesâ€”Shaanxi and Yunnan, where I head nextâ€”which at 200 yuan for two years is a pretty good deal. I had to pay 10 yuan to enter, much as this couple probably did. 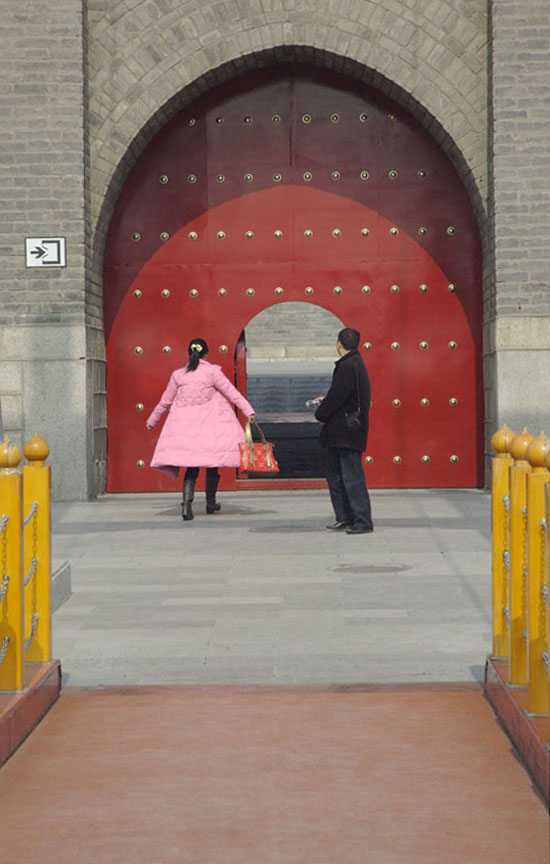 At 45 feet wide, the top of the wall is so roomy that you could drive three Hummers (or 84 regular-sized cars) side-by-side at the same time. Luckily those greedy monsters aren’t anywhere in Xi’an, though they apparently exist in Shaanxi; Leo told me that of the many shady mine owners in the province, the most extravagantly corrupt flaunts his ill-gotten wealth with four Hummers. Boo-yah, workers of the world. Suck it.

Instead, we saw displays in progress. The city was preparing for the Spring Festivalâ€”also known as the New Yearâ€”which begins February 17. Covered in glossy fabric or plastic and waiting for parts, the displays were gorgeous and freakish at once. 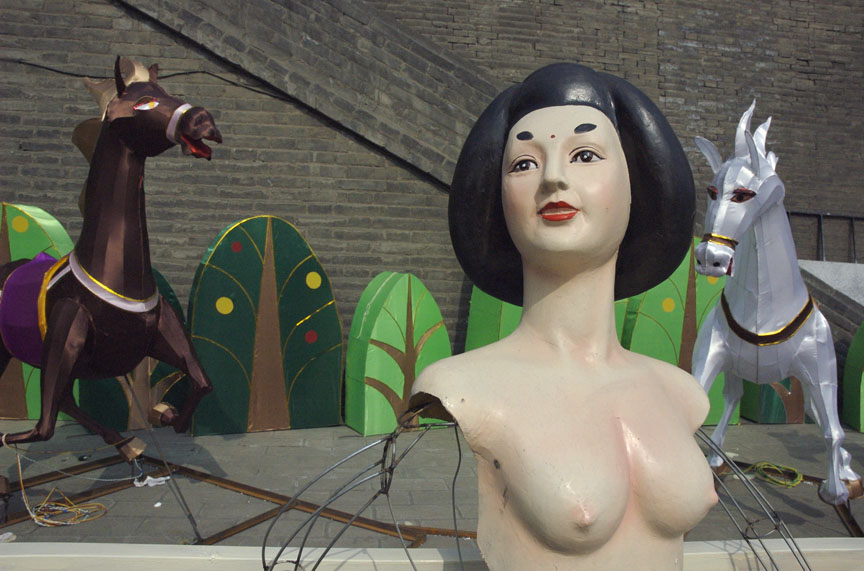 Xi’an is a now a city of seven million. In the Tang Dynasty (6thâ€“9th centuries), it was one of the largest cities on the planet. Being one terminus of the Silk Road, Xi’an was open to foreign ideas and influence in a way that China purports to be today.

I’ve yet to see a face with a moustache in China, but perhaps this grooming feature will lead the way. It did in the Tang Dynasty.

“Do you see that one there?” Leo said, pointed to the figure of a fellow with the straight, mid-length ‘stache of central Asia, who was rendered kowtowing to a monk riding an elephant. “He’s a foreigner.” 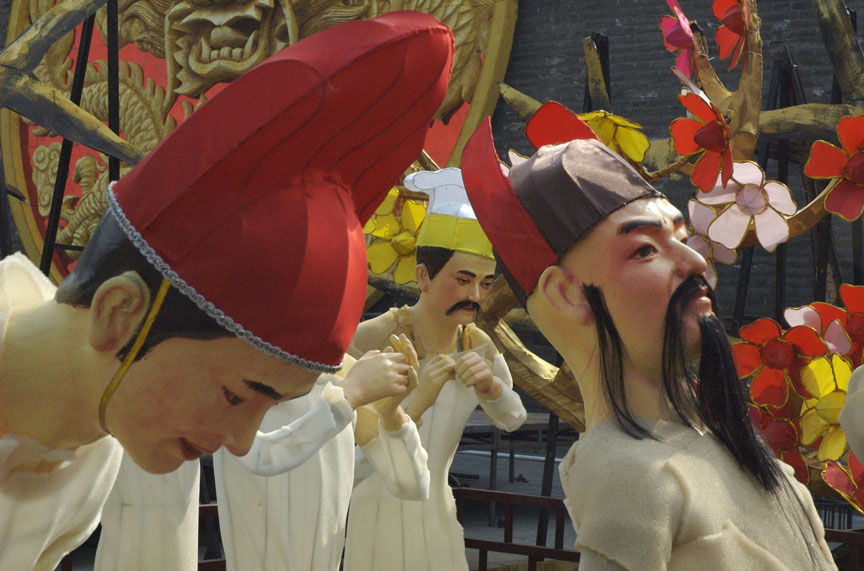 “He looks Kazakh,” I said, though really he could just as likely be Turkmen or Uzbek.

Workers in blue overalls were busy assembling or repairing the displays. Lots of musicians and dancersâ€” 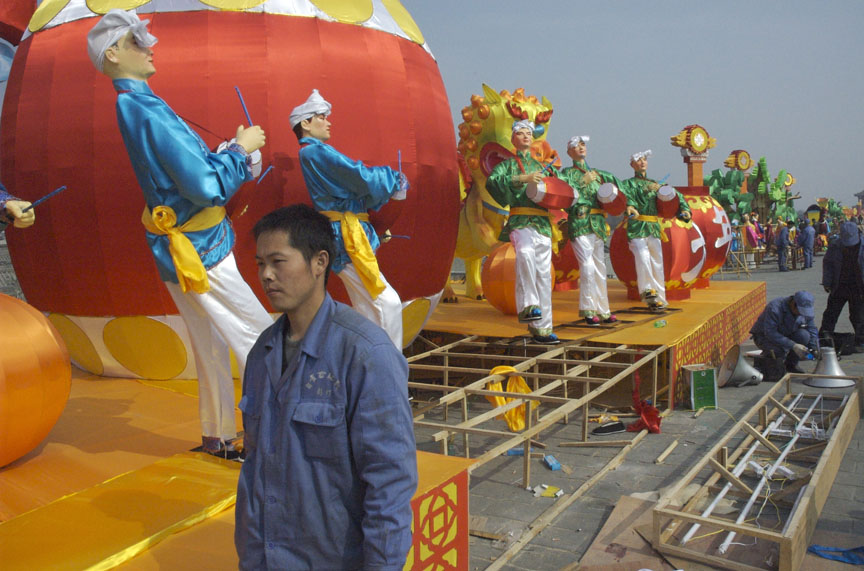 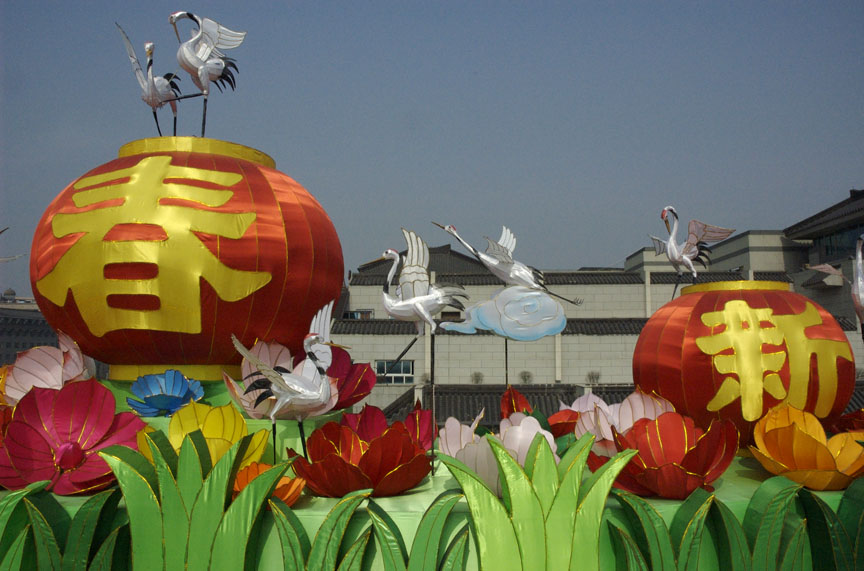 â€”back-up flowers, because you can never have too manyâ€” 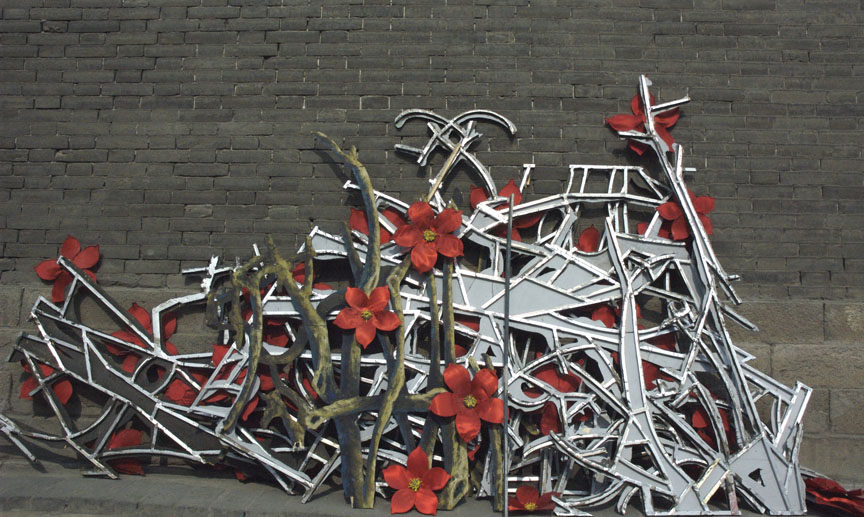 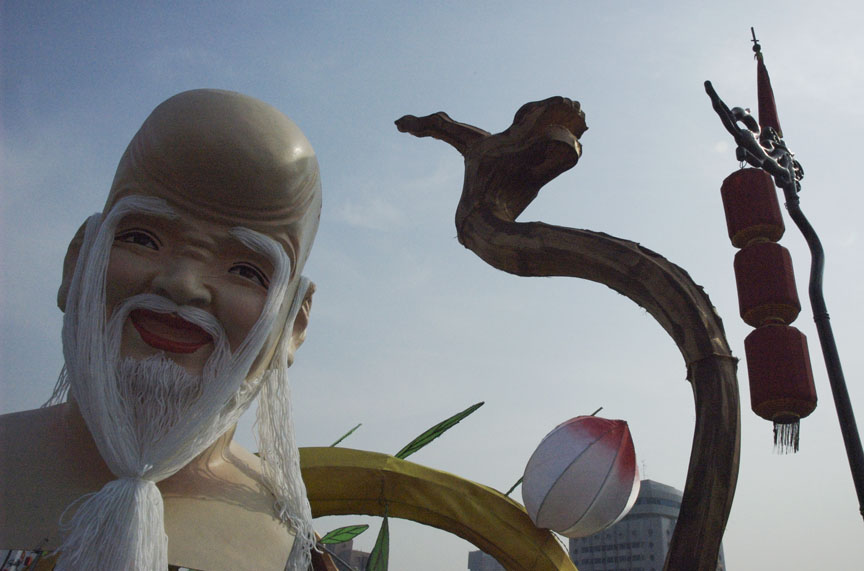 In many parts of the world, spring is a sweet dream only achieved by surviving weeks more of unfortunate weather. But not in China. It’s spring. It’s the New Year. At least, that’s the promise. 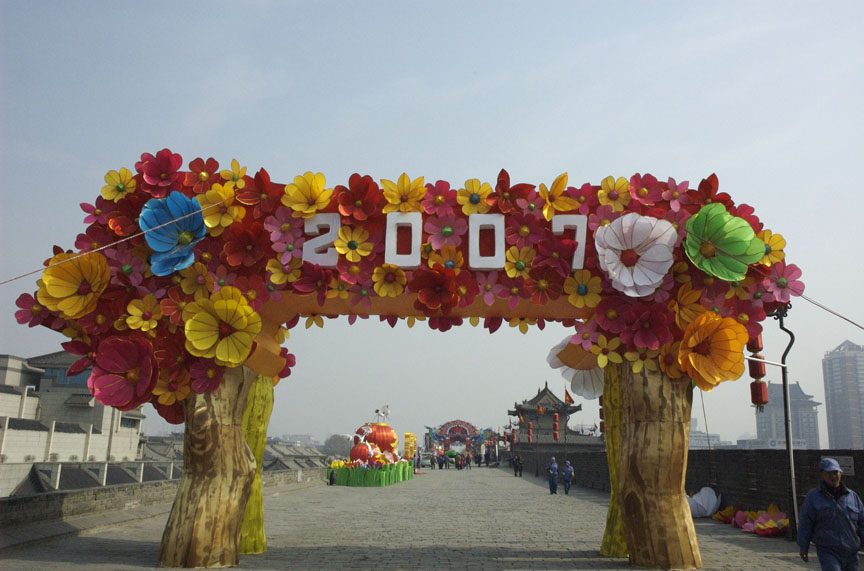 So Happy New Year. Hope is on the way.

2 Replies to “February Sucks Everywhere – Even in Xi’an”